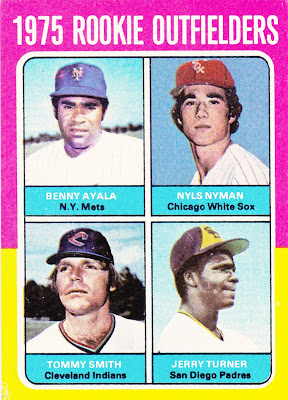 Card fact: I'm quite certain that is an airbrushed White Sox cap atop Nyls Nyman's head. Tommy Smith's cap may or may not be airbrushed, too.

What I think about this card now: No future stars there, eh? Also, Topps must have struggled to find a shot of Jerry Turner. You don't see the absolute profile shot too often.

Benny Ayala, Mets: Not until 1980 Topps, with the Orioles.
Nyls Nyman, White Sox: 1976 Topps. His only one.
Tommy Smith, Indians: 1977 Topps. As an airbrushed Mariner. Also his only solo Topps card.
Jerry Turner, Padres: 1977 Topps

Most successful player: Turner and Ayala both played 10 seasons, with Turner playing in more than 300 more games than Ayala. Turner also has slightly better stats. Even though Ayala got into a few postseason games with the Orioles as one of Earl Weaver's platoon favorites, I'll give the edge to Turner. 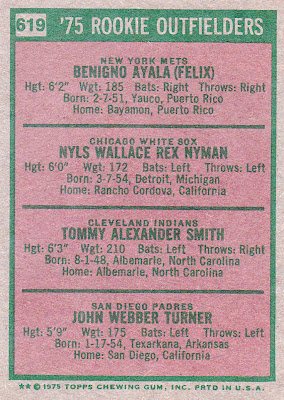 Most awesome middle name: Nyls Nyman already has the best first name. Throw in Rex and Wallace as your middle names and it's no contest. Also, where did John Webber Turner get "Jerry"?

Other blog stuff: The pink-yellow border combination becomes the third border combo with 50 cards. It is just two off the overall lead with a few more rookie cards to go.
Posted by night owl at 12:34 AM

I recently had a very exhausting conversation with my 11 year old about how some people named William go by Bill or a Robert will use Bob. He didn't understand. I don't think I'd want to discuss how you get Jerry from John because that's one I don't get either.