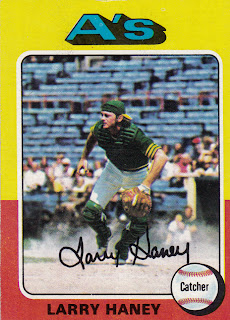 Card fact: Like the Steve Busby card, the player pictured in this card is not the player listed. That is a photograph of Dave Duncan on Larry Haney's card. So, Haney is actually not pictured in the 1975 set. (Interestingly, Duncan is shown as an Indian on his card, but also appears in the set as an Oakland A).

What I think about this card now: Wow, was baseball THAT unpopular in 1974? The attendance looks the same as a random high school game in my area.

Other stuff: Haney was a career-long backup catcher known for his defensive ability. He played for the Orioles, Pilots, A's, Cardinals and Brewers and never had more than 177 at-bats in a season.

After his playing career, which lasted from 1966-78, he became the bullpen coach for the Brewers. He was also a pitching coach for a couple of years in the 1990s.

Haney's son, Chris, was a pitcher in the 1990s for the Royals, Indians, Red Sox, Expos and Cubs. He was also a member of my fantasy teams in the mid-90s.

Haney also has another notable baseball card as his 1969 card features a reverse image of the photo that appeared on the 1968 Topps card and shows him as a left-handed catcher. 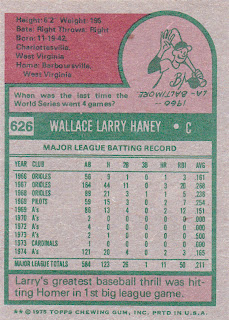 Back facts: There have been seven World Series since that unfortunate one in 1966 that went just four games. The most recent was the 2007 Series when the Red Sox beat the Rockies in four straight.

Other blog stuff: A happy 69th birthday to "Shaft" singer Isaac Hayes. Shut your mouth.
Posted by night owl at 12:58 AM

asking about baseball being THAT unpopular... when I was a kid, say '74,'75, '76 seasons, you could literally sit just about anywhere you wanted for an Angels game.

And that picture of Duncan is probably '72 because they didn't have green shirt uniforms until that year.

I don't care who it is or WHEN it is, I think I just found my favorite card in the whole set.

That is a pretty awesome card. Too bad it's the wrong guy. I wonder if Topps had an official policy that if they couldn't get a picture of the real player by press deadline, they would just sub some other random look-alike, because outside of the star players, most fans wouldn't recognize the difference (especially in a far shot).

Also, Isaac Hayes would probably appreciate your birthday wish, except (unfortunately) he died in 2008.