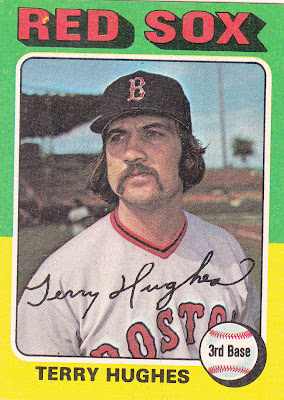 Card fact: This is the only solo Topps card in Terry Hughes' career. He appears on a four-player rookie card as a Cardinal in the '74 Topps set.

What I thought about this card then: It was one of my Red Sox-loving brother's first Red Sox cards from the set, so it makes me think of my brother.

What I think about this card now: There are a lot more major leaguers who are looking like Hughes these days. It was a look that was out of style for a long time, but now it seems to be coming back.

Other stuff: Hughes was the No. 2 overall draft choice by the Cubs in the 1967 draft. He came up the majors with the Cubs for three at-bats, but spent the rest of his time in the minors before finally being purchased by the Cardinals in 1973.

Hughes appeared briefly with St. Louis, then was traded along with Reggie Cleveland and Diego Segui to the Red Sox. Hughes had his career highlight for Boston in 1974, appearing in 41 games and batting .203.

Hughes returned to St. Louis and the minors in 1976. He never appeared in another major league game after his '75 card hit stores. He is now a middle school phys ed teacher in his native South Carolina. 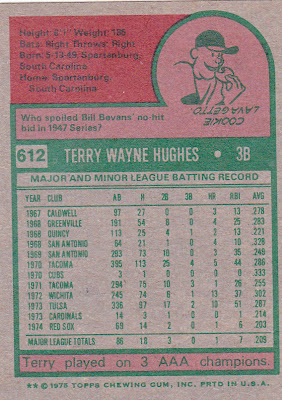 Back facts: Hey! A Dodger cartoon! It's been awhile.

Other blog stuff: "Archie Bunker," the late Carroll O'Connor, was born on this date 87 years ago.
Posted by night owl at 1:20 AM

Pretty sure Hughes had a 1973 rookie stars care with the Cubs.

Dude looks like a lady! (A lady with a mustache.) 3 AAA champions is nothing to sneeze at.