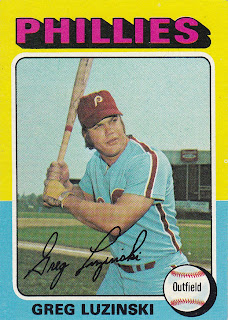 Card fact: This is the seventh time that there has been back-to-back cards of players wearing powder blue uniforms. Five of those occasions involved Phillies players.

What I thought about this card then: I didn't see it. The first Greg Luzinski card I saw was his glorious 1976 Topps card.

What I think about this card now: If you stare at Luzinski, without knowing him, he looks like a bad guy in one of those '80s movies about teenage kids in the '50s.

Other stuff: Luzinski was your prototypical 1970s slugger, a popular player in Philadelphia and then in Chicago with the White Sox. Luzinski hit more than 30 home runs in a season four times, when hitting 30 home runs a year was a big deal.

Luzinski broke out for the Phillies in 1973, but had injury issues in 1974 as he played in just 85 games. He bounced back big-time in 1975, driving in 120 runs and finishing second in the National League MVP voting. He finished second again in 1977.

He played in the postseason four different years for the Phillies. I remember him being a nemesis for the Dodgers in the NLCS in 1978. He also wore out the Astros in the 1980 NLCS.

After a down year in 1980, Luzinski was purchased by the White Sox. He settled in as a designated hitter for Chicago, grew a beard, and enjoyed four decent seasons before stepping away after 1984.

Luzinski later became a high school coach. His son, Ryan, played in the Dodgers organization, but never made the majors. Luzinski later opened a barbecue restaurant at Citizens Bank Ballpark in Philadelphia. 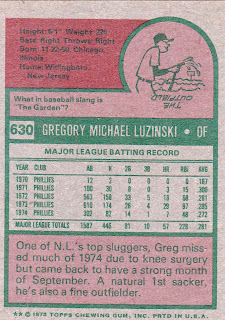 Back facts: Luzinski may have been a natural 1st sacker, but he played only 32 games of his 15-year major league career at first base. Thirty of those games came in 1971 and 1972.

Also, "The Garden" is a term with which I'm unfamiliar.

Other blog stuff: The blog crossed the 60,000 unique views threshold in the past 24 hours. Thanks for reading.
Posted by night owl at 12:40 AM

Luzinski was a 1st baseman in the minors, but was switched to left field because the Phils already had Deron Johnson at 1B.

The outfield was frequently referred to as the "garden" back in the 1960s (and earlier?) I remember reading on one of Vic Davalillo's baseball cards where he was referred to as a "center gardener".

Nobody says "rhubarb" or "donnybrook" any more either. Conversely, nobody used the terms "rake", "deal", or "go yard" until recently.

Growing up in STL, seeing Luzinski (following Schmidt in the batting order!)walk into the batter's box (with what always seemed to be with runners on and/or the game on the line brought horror to my young psyche, only starting to breathe regularly after, if, and when the Cardinal hurler was able to retire him, usually by K, if my memory serves me correctly.

Greg Luzinski might of struck out a lot, but he had his damaging moments to opposing pitchers, imposing similar fear that i felt as just a spectator, i like to think, to National League hurlers.