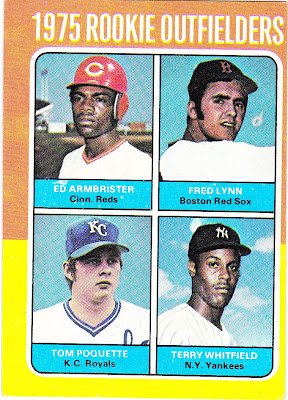 Card fact: The Cincinnati Reds are abbreviated as the "Cinn. Reds" on this card. Apparently someone thought they were the "Cinnamon Reds."

What I think about this card now: This was the toughest of the rookie cards for me to obtain and one of the toughest cards in the whole set to finally land. No one likes giving up their Fred Lynn rookies. That's why this one is off-center, miscut and there's a weird printing flaw next to Lynn's head.

The funny thing is I found another version of this card in a rummage sale a couple years ago. It's in similar shape -- maybe slightly better -- and I've replaced this card with the rummage sale one.

Most successful career: Lynn was a huge favorite in Boston, my brother's favorite player, an MVP his rookie year, and hit more than 300 career home runs. 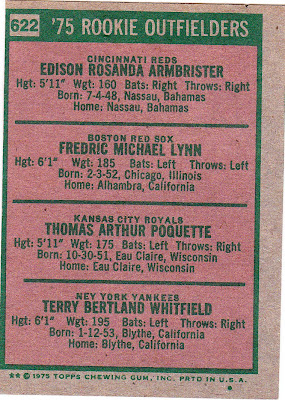 Most awesome middle name: As intrigued as I am about what a land of Berts might look like, I have to go with "Rosanda." It sounds like something you'd get tattooed on your chest underneath a giant heart.

You're absolutely right. This card is a bitch to find in nice condition. I see them pretty often otherwise (passed on a beater in a dollar bin on Sunday), but never anywhere near NM condition.

It looks like Fred is blowing smoke rings. When you said that card #616 wasn't as hard as another rookie card, I thought you were talking about the Carter card.

Coolest middle name ever was back on card #120 of this set. Hint: the guy pictured on the card, not the guy named on the card.

The Land of Berts - hilarious.