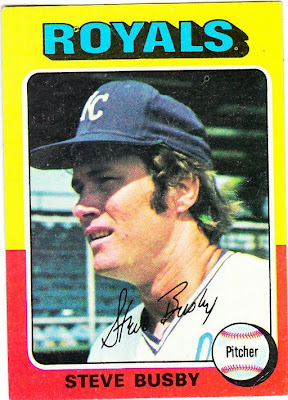 Card fact: In one of the more famous photo gaffes in Topps' history, this is a picture of Royals catcher Fran Healy, not of Steve Busby.

Like me, you may be desensitized to mistakes like this, just because there have been so many through the years. But take a moment to think about how big a mistake this was. Busby had been in the majors for three years. He had just enjoyed the best season of his career in 1974, winning 22 games and throwing his second no-hitter in as many seasons. He was an emerging star. And Topps screwed up the photo. It would be akin to Topps using a photo of current backup Royals catcher John Buck on Zack Greinke's card. Can you image the criticism if that happened today?

The only photo of Busby in the 1975 set is in a highlights card.

What I thought about this card then: Someone -- I don't remember who -- had the mini card. My memories of Busby back then involved my friend from Kansas who moved into my neighborhood. He was a die-hard Royals fan and a big Busby fan. I knew my friend during the period when Busby was trying to recuperate from rotator cuff surgery. Busby didn't play a game in 1977, a summer that included many visits to my friend's house and many reassurings by my friend that Busby would be back better than ever.

Personally, I didn't care. I wasn't a Royals fan. But it's obvious my friend really, REALLY cared. A year later, he moved back to Kansas. Busby returned to pitch, but he was never the same. I always wondered how my friend handled that.

What I think about this card then: It's really a terrible photo, isn't it? I wonder what the process was that made Topps pick that photo -- the wrong photo. It hints at a rush job.

Busby pitched until 1980, then retired after an eight-year career. He's worked as a Rangers broadcaster for quite awhile. 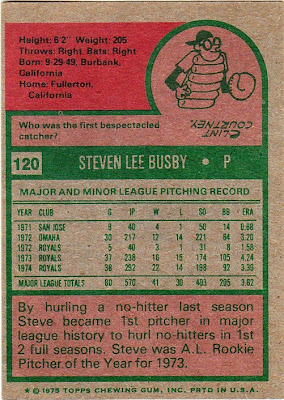 Other blog stuff: I'll throw out a birthday: Livan Hernandez was born on this date in 1975. Although that's up for debate.
Posted by night owl at 12:41 AM