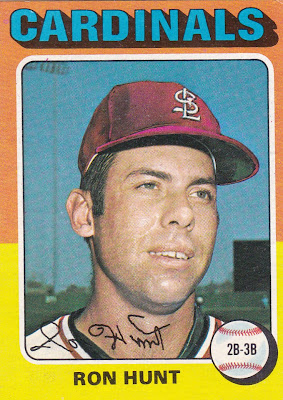 Card fact: This is the final Topps card of Ron Hunt during his playing career.

What I think about this card now: Topps isn't fooling me with that "Cardinals" cap. Hunt is airbrushed from his Expos get-up because he was obtained off waivers by the Cardinals in early September 1974 and Topps was out of luck getting a photo.

Other stuff: Hunt came up with Mets, who were in their sophomore season in 1963. He became the Mets' starting second baseman and finished second in the National League Rookie of the Year voting to Pete Rose that year.

Hunt played for the Mets for four years but was dealt to the Dodgers in the Tommy Davis deal. Then, after a season with L.A., he was shipped to the Giants in the first trade between the two teams since their moves out to the West Coast.

Hunt's reputation for getting hit by pitches really grew while he played for San Francisco. Beginning with his first season with the Giants in 1968, his HBP totals jumped and he led the league in HBP for seven straight seasons. His phenomenal 50 HBPs in 1971 while he was with the Expos is the most recorded in the modern era.

Hunt played with the Expos through 1974 and ended his career with the Cardinals. After his career, he eventually started a baseball camp, which he has operated for more than two decades. 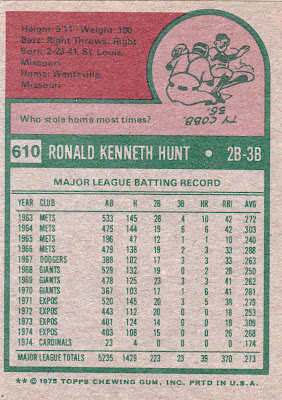 Back facts: The cartoon means to say: "Who stole home the most times in a career?" Although the Baseball Almanac site says Cobb stole home 54 times, not 35.

Other blog stuff: I'm really starting to believe my speculation on whether Topps waited to fill in the players who would represent the higher numbers in the set. If you look at the cards since No. 600, only Rod Carew and John Ellis are what you would have called "definites" for the set. Every other player has been either at the very end of his career, the very beginning, or was traded recently. Ellie Rodriguez doesn't fall into those categories, but he also didn't have a card the previous two years, so he wasn't a definite either.

I'll be tracking the rest of the cards.
Posted by night owl at 12:35 AM

His numbers ok, but I've never heard of him. I do love the cartoon!

What I remember most about this card is an older neighborhood kid named Adam stole it from me, then brought it back several days later. He had folded it in half, then in half again and stuffed it in his pocket. It would probably be another 25 years before I got a replacement

The Mets very first star player. I’m too young to remember him on the Mets, but he was one of my top favorites when he was on the Expos. I loved his belligerent style of play.