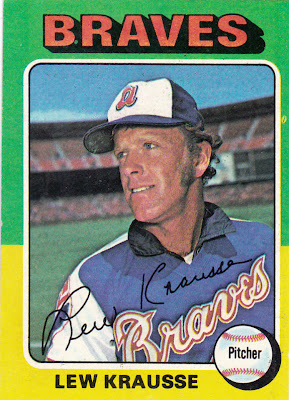 Card fact: This is the final Topps card issued of Lew Krausse during his career.

What I thought about this card then: This is another one of those cards that I associate with my brother because it was part of his collection. I was relieved that he had the card because we both didn't know what to make of the guy.

What I think about this card now: Krausse had Topps cards from 1963-73, but wasn't issued one in '74 because he barely played in the majors in '73. If you look at those earlier cards, he looks his age. But that '73 season must have been trying, because when I was a kid I thought Krausse was about 51 years old based on this photo. It still looks that way to me (although I concede I was being a little harsh as a youngster). Krausse was actually 31 at the time of this photo.

Other stuff: Krausse came up to the majors with the Kansas City A's in 1961 and was the youngest player in the big leagues at the time. He remained with the A's through the '60s, working as both a starter and reliever.

Krausse was dealt to Milwaukee and then to Boston. He returned to the A's in '73 but didn't get called up and was purchased by the Cardinals, where he played one game. Krausse made a comeback with the Braves in '74, pitching in 29 games. He was released after the season, signed again by the A's, and pitched in the minors in '75. 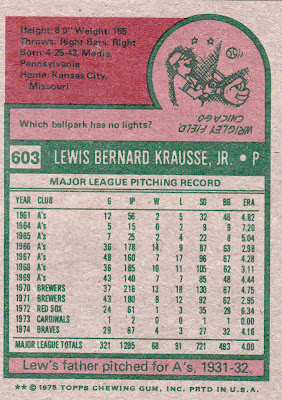 Back facts: Of course, the Cubs do have lights now, installing them 13 years after this cartoon hit packs.

Other blog stuff: On this date in 1975, the Royals fired Jack McKeon and replaced him with Whitey Herzog. It proved to be a solid move as the Royals would make the playoffs three straight years under Herzog. But McKeon is still managing to this day.
Posted by night owl at 1:29 AM

I agree totally about Krausse looking older. As a kid, this card confused me because he looked to old to play..

At first glance, I thought he must be a manager. That "other blog stuff" about McKeon is amazing. He's been hanging around the ballfield a long, long time.