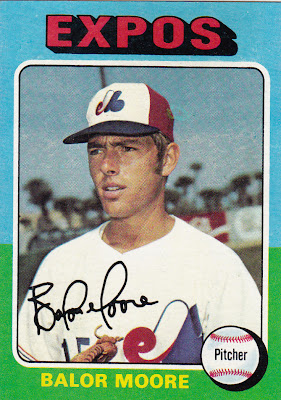 What I thought about this card then: I never knew about it.

What I think about this card now: Always enjoy seeing the Coca-Cola sign on Montreal Expos cards.

Other stuff: Moore was a reliable starter for the early Expos, especially during the 1972 and 73 seasons. He went 7-16 in 32 starts in 1973. His strikeout average was second in the National League in '72. But he barely pitched during an injury-plagued '74 season and had elbow surgery the next year.

Moore was acquired by the Angels in 1975 and he pitched a handful of games for them in '77. But the Blue Jays purchased him after that season, and Moore pitched in 37, 34 and 31 games respectively in '78, '79 and '80. Toronto used him as both a starter and reliever.

Moore hung up the spikes after the 1980 season. He went into business after his career. An extensive interview of Moore about his beginnings in baseball can be found here. 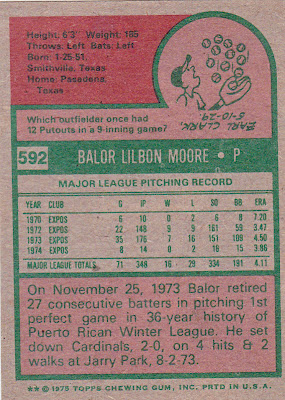 Back facts: That's quite a feat mentioned in the write-up for Balor Lilbon Moore.

Other blog stuff: Cheech Marin of "Cheech and Chong" fame was born on this date in 1946. You don't hear much about "Cheech and Chong" these days, which would have been hard to believe back in the late '70s/early '80s because they were everywhere. They were enormously popular with us teenagers. In fact, I remember someone in my junior high class bringing in a Cheech and Chong record and playing it for the class. My teacher must've been pretty hip or clueless to the drug references.
Posted by night owl at 12:48 AM

Cheech and Chong were just here in Calgary a couple of weeks ago.
Sold out show.....

Nice reading about Balor Moore. He's not only local guy, but he threw for the Angels too. Wasn't easy growing up an Angels fan in Houston. In early seventies, the paper hardly mentioned the Astros, let alone the AL West.

A perfect game is a perfect game and a nice thing to have on your resume. Speaking of perfect games, Kenny Rogers is going to be inducted into the Texas Rangers Hall of Fame soon.