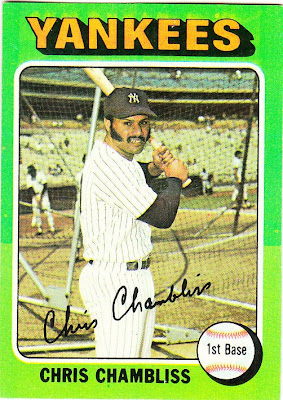 Card fact: This is the first card of Chris Chambliss as a Yankee.

What I think about this card now: It's a very nice view of what was going on in the batting cage on that day. Good stuff.

Other stuff: I will always consider Chambliss a Yankee, as many also do. But Chambliss actually came up with the Indians and was named American League Rookie of the Year in 1971.

He played with the Indians through the early part of 1974, then was dealt to the Yankees in April of that year in the famed trade that also brought New York Dick Tidrow and Cecil Upshaw in exchange for Steve Kline, Tom Buskey, Fritz Peterson and Fred Beene.

It proved to be a terrific deal for New York, enhanced by the fact that Chambliss hit one of the most memorable home runs of the '70s, delivering the series-clinching blow off of the Royals' Mark Littell in the 1976 A.L. Championship Series. Who hasn't seen Chambliss knocking down jubilant Yankees fans on his way to home plate?

It was the first postseason series the Yankees had won since the 1962 World Series, and ushered in another semi-dynasty era for New York. Chambliss' best season for the Yankees was 1976, but he remained a reliable offensive and defensive first baseman for the team through the 1979 season. He was one of the few Yankees of that time that I did not despise.

Chambliss was traded by the Yankees to the Blue Jays after the '79 season. Toronto turned around and traded him to Atlanta a month later. Chambliss spent seven seasons with the Braves, so while I equate him with the Yankees, he was a Brave longer. He ended his career back with the Yankees, for one game in 1988.

He became a hitting coach and manager in both the majors and minors after his career. I saw him get thrown out of a game two years ago when he was managing the Charlotte Knights. He's now the hitting coach in Seattle. 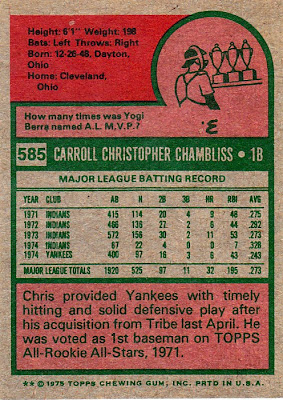 Back facts: Carroll, huh? Guess it was good enough for Archie Bunker.

Other blog stuff: A historic moment. This is the 50th green-light green bordered card. And with this card, green-light green takes sole possession of first place in the overall border standings. Orange-brown has been in the lead for hundreds of cards, so this is BIG.

Also, the blog will be recognizing Independence Day by taking a few days off. See you after America's birthday.
Posted by night owl at 1:18 AM

I like it...another catcher cartoon, even it is a Yankee. I remember Chambliss as a Yankee, but I always associate him with the Braves.

Big shout out to the green-light green borders for taking the lead.

Member of the UCLA Athletic Hall of Fame.