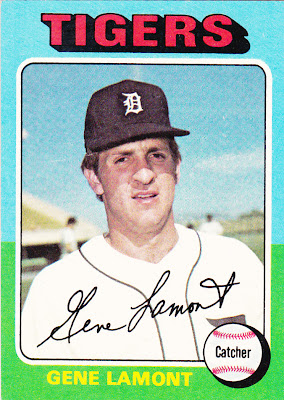 Card fact: This is Gene Lamont's only solo card as a player. He appears on a 1971 Topps rookie card, sharing it with Lerrin LaGrow.

What I think about this card now: I associate Lamont totally with being a coach and a manager. He has been one or the other in the majors since the mid-1980s. So when I see this photo, he doesn't look like a player to me. It looks like Topps snuck a photo of a coach into the set.

Other stuff: Lamont played five seasons in the majors, all as a backup catcher for the Tigers. Except for the 1974 season, he didn't play in more than 15 games a season. But in '74, he worked as the backup for Jerry Moses (Bill Freehan was moved to first base) and appeared in 60 games, batting .217. 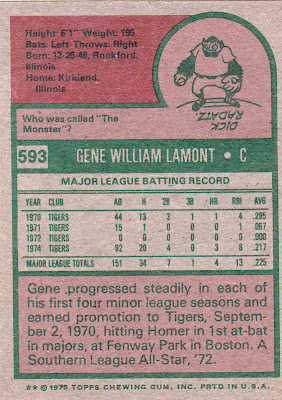 Back facts: Please click on the scan to get a better look at the most awesome cartoon in the set.

Also, Lamont was the 44th major leaguer to hit a home run in his first big-league at-bat. A total of 109 players have accomplished that feat.

Other blog stuff: On this date in 1975, Braves pitcher Tim Hudson was born.
Posted by night owl at 12:56 AM

The two best cartoons in the set (so far) both feature monsters.

Also: When should you ask for Gene Lamont? Whenever you want ... Gloves!

That is a great cartoon. I didn't know that many players had a 1st AB homer. I know Will Clark did it against Nolan Ryan (sorry, I had to mention Clark)!