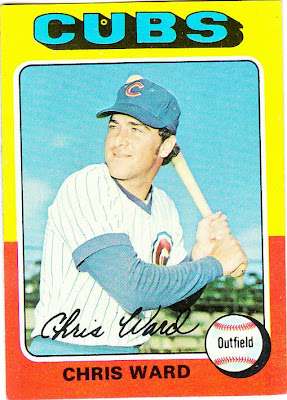 Card fact: This is the first and only solo Topps card of Chris Ward.

What I thought about this card then: I didn't know it existed. In fact, it is yet another Cubs card from this set that features a player I knew nothing about until I tracked down the card while completing the set in 2004. The Cubs sure had a lot of players in '74 that made little impact.

What I think about this card now: The cap he's wearing looks like some sort of denim trucker's cap.

Ward would return to the minors for the 1976 and 1977 seasons, playing in the Chicago, Cleveland and San Diego organizations. 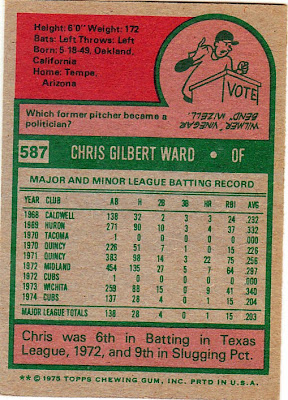 Back facts: Wilmer "Vinegar Bend" Mizell was a U.S. congressman in North Carolina. In fact, his tour as a congressman ended just before this card came out as he did not win a fourth term in 1974. But Mizell went on to serve in the Ford, Reagan and Bush administrations.

Other blog stuff: On this date in 2005, the sports of baseball and softball are dropped from the Olympic Summer Games. Summer without baseball. This makes no sense.
Posted by night owl at 2:17 AM

"The Cubs sure had a lot of players in '74 that made little impact."

Your right Wrigley Wax. 1973/1974 was the end of good-excellent teams of the late 60's and early 70's and start of sub .500 squads that didn't stop until 1984. The mainstays were getting too old. A lot of call ups from the minors and the Cubs did not have a good system at the time

There's a lot of blue on that card. It looks good. Baseball is one of a few sports looking to return in the 2016 Olympics. I hope they bring it back.