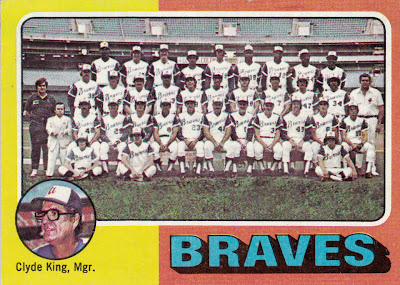 Card fact: This is Clyde King's first-and-only appearance on a card with the Braves. He was hired to replace Eddie Mathews in the middle of the 1974 season.

What I thought about this card then: I associate it with that sheet of flimsy '75 team cards that we ordered from Topps. Perhaps the Braves card was positioned first (I don't remember if they were in alphabetical order).

What I think about this card now: Well aside from this being probably one of the last examples of someone wearing black-framed glasses until Joe Maddon came along, somebody, please, PLEASE tell me what the story is with the little dude in the three-piece suit just above King's head. That is some team card craziness.

Other stuff: The Braves finished 88-74 and in third place in the National League West. But King lasted only into the middle of the 1975 season before he was let go. It was the '70s and the Braves were about to get really awful. King was replaced by someone named Connie Ryan to finish out the '75 season. Dave Bristol took over for 1976. 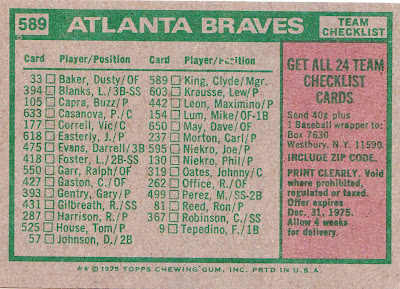 Back facts: The checklist doesn't look right without Hank Aaron's name at the beginning. But Topps was on the ball after the offseason trade of Aaron to the Brewers. New acquisition Dave May's name is listed in the middle of the second column without any signs of distress.

Other blog stuff: Let's see if the '74 Braves were represented properly by Topps.

Of the players not featured, there isn't much of note. Pitcher Jack Aker appeared in 17 games for the Braves, but didn't even finish the season with them, getting purchased by the Mets in June. Utility player Ivan Murrell had 133 at-bats for the Braves, but it was the last season of his career.

The Braves fair quite well in terms of the percentage of '74 roster players featured in the '75 set:

I'm going to reference a 2/16/11 entry (milwaukee braves team photo card)in the 1965 topps blog about the identity of the little man. According to a posting is name was Donald Davidson. Must be the same guy.

forgot to mention his role was the braves traveling secretary and shows up in pictures from 1961 to 1976 cards. Isn't 76 the time Ted Turner came aboard?

I have owned this card for most of my 36 years and I never noticed that. Meet my new favorite team card.

Thanks for the info, Douglas. I believe you're right. Great story about Mr. Davidson.

Good to see that Mr. Howell got a job in baseball after getting off that isle.

Brilliant catch NO. I look at cards much closer than I used to, and I would not have noticed that. I'm glad someone cleared it up too.

Donald Davidson was a legend in the Braves organisation. He was a combination Mr. Fixit/Father Confessor/Whipping Boy for the team.

No truth to the rumor that George Constanza was Assistant to the Travelling Secretary for the '75 Braves.