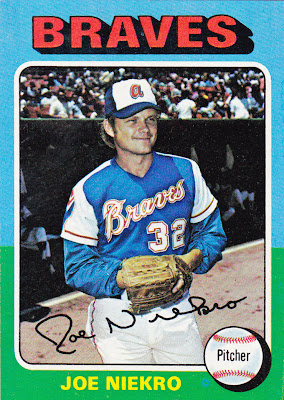 Card fact: This is a card of a player on the precipice of fame. In 1975, Niekro was purchased by the Astros from the Braves. Niekro would then begin a 10-year career with the Astros in which he won in double figures eight times and won 20 games twice.

What I think about this card now: Seeing Niekro in any uniform other than an Astros uniform seems strange.

Other stuff: Niekro pitched 22 years in the majors, mostly with Houston. But he began with the Cubs. After a couple of decent years, he was dealt to the Padres and things didn't go so well in San Diego. He then played for Detroit and then Atlanta, where he teamed with brother, Phil.

In Atlanta, Joe focused on the knuckleball that his brother threw so well. Combined with his other pitches, he became a powerful member of the Astros' pitching staff and he won 20 games in back-to-back seasons in 1979 and 1980. Niekro led the Astros into the postseason in 1980 by starting and winning the special playoff game against the Dodgers.

In 1985, Niekro was traded to the Yankees in a deal that sent Jim Deshaies to the Astros (of special interest to me since I have interviewed both Joe Niekro and Jim Deshaies). Niekro reunited with Phil again with the Yankees.

Niekro's final team was the Twins. He pitched in Minnesota through 1988. His most famous moment with the Twins was when he was caught with a nail file on the mound. The clip of Niekro waving his hands as the nail file sails from his uniform has been played over and over again.

Niekro later worked as the pitching coach for the Silver Bullets, the all-female baseball team in the mid-1990s.

Niekro, the father of former Giants first baseman Lance Niekro, died from a brain aneurysm at age 61 in 2006. 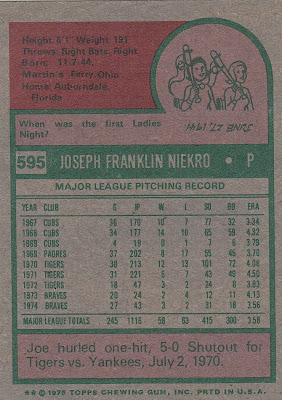 Back facts: Note that the cartoon specifies that it's asking about the first Ladies NIGHT. The first ladies DAY, according to my limited research, was June 16, 1883, by the New York Giants.

Other blog stuff: Today's my birthday. Unfortunately, there is not a single player in this set that celebrates his birthday on July 16. But that doesn't matter. Because it's my birthday.
Posted by night owl at 2:37 AM

Happy Birthday to you.

Joe Niekro had long and varied career with highs and lows. My most vidid memory of him was right after nail file incident. He appeared on David Letterman walked out on stage with a tool belt attached with power sander, electric drill, and various other carpenter accessories. It was priceless.

I didn't even know Joe played for the Braves. Before my time, but I'll always remember seeing that nail file flying out of his hand.

Couple more thoughts on Joe. Several pitchers had thing go not so well for San Diego in 1969. You can't blame Joe; his ERA was about 1/2 run better while losing 18 games than when he won 14 the year before.

I looked up that the Astro bought him for 35K. Given that he won 144that comes out to $243 a game. Possibly the greatest steal I can think of.