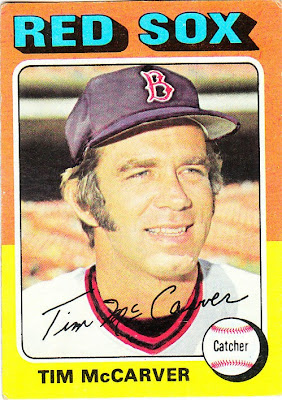 Card fact: Tim McCarver is airbrushed into a Red Sox cap in this photo. He played for St. Louis most of the 1974 season, but was purchased by Boston in September of 1974 and spent the rest of '74 and the early part of '75 with Boston.

What I think about this card now: This was one of the final cards I needed to finish off the set. Players who become famous broadcasters are often difficult to track down.

Other stuff: McCarver is so well-known as a broadcaster that it overshadows the fact that he played in the major leagues for 21 seasons and was a four-decade player. He spent most of his career catching for St. Louis and Philadelphia, but also played for Montreal and Boston.

After his playing career, McCarver worked as a broadcaster for local Philadelphia and New York television, then branched out to national television. As a young fan, I remember him broadcasting on WOR in New York (or was it Secaucus, N.J?),  and I enjoyed his broadcasts.

Now, of course, he is reviled by many fans for his work on Fox's weekly broadcast. McCarver isn't the same broadcaster as he was back when I was young. He does make a lot of mistakes and does overexplain things, but he never bothered me as much as Joe Morgan. 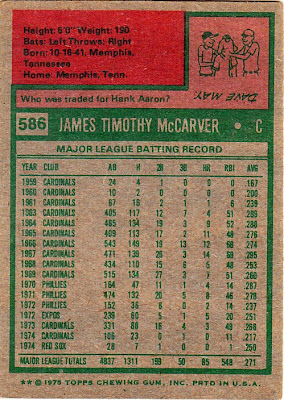 Back facts: I think that every aspect of Hank Aaron's year in '74 was addressed in cartoons in the 1975 set. Aaron was traded from the Braves to the Brewers on Nov. 2, 1974. Milwaukee also sent a minor leaguer, Roger Alexander, to Atlanta a month later to complete the deal.

Other blog stuff: On this date in 1932, Cubs shortstop Billy Jurges is shot twice in his hotel room by a former girlfriend, showgirl Violet Valli. Jurges, shot in the shoulder and hand, doesn't prosecute and Valli is signed to sing in nightclubs based on her fame. Jurges recovered from his injuries and helped the Cubs win the 1932 National League title.
Posted by night owl at 12:21 AM

McCarver's status as a 4-decade player is bogus. The Phillies released him after the 1979 season, and he spent the 1980 season in the Phillies' broadcast booth. After rosters were expanded in September, McCarver rejoined the team and made a few token appearances at 1st base, just to be able to say he played in 4 decades.

You would think he would have had more respect for the players who had been on "his" Phillies team all season, or for the youngsters getting a September call-up and just embarking on a career, than to prolong his already-long (and fine) career.

At least McCarver's story isn't as much of a sham as Minnie Minoso's, who was re-activated from his White Sox coaching position once a decade to grab an at-bat and become, what, a 6-decade player?

Sure, this is a bonanza for a team's marketing suit, but you would think ex-players would have more respect for the game than to participate in a stunt like this, that only cheapens the accomplishments of "true" 4-decade players, like Ted Williams, Jim Kaat, and whoever else.

I thought this was a real beaut too. I've got this one and a number of other unlikely shots of pretty well-known players from the 70s at: