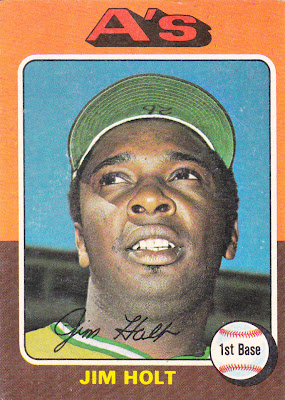 Card fact: Jim Holt is looking way up in the sky because he doesn't want to show you that he is really wearing a Twins cap. Holt was traded from the Twins to the A's in August of 1974. He is painted into a green-and-gold jersey.

Other stuff: Holt played first base and the outfield for the Twins and A's between 1968-76. He was a part-timer for most of his career, although he hit .297 in 132 games for the Twins in 1973 when Harmon Killebrew was dealing with a knee ailment that sidelined him for a good chunk of the season.

The Twins traded Holt for Pat Bourque late in the season in '74 (Bourque was returned to the A's after the season). Holt's biggest moment with the A's was knocking in two runs as a pinch-hitter in the sixth inning of Game 4 of the '74 World Series against the Dodgers. Holt's single broke open a close game and a close series and gave the A's a 5-2 victory. Oakland would go on to win the Series in 5 games. 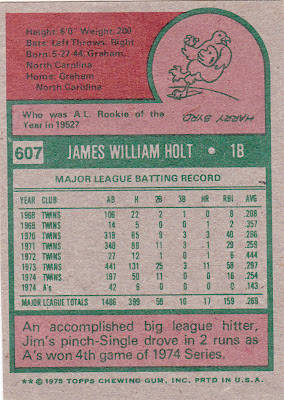 Back facts: I don't know why "an accomplished big league hitter" is necessary. He's in the big leagues. He's a hitter. I think that makes him "accomplished."

Other blog stuff: The orange-brown border combination has moved back into first place with its 52nd card. It's apparently going to be a dogfight until the end.
Posted by night owl at 12:41 AM

I'm surprised that Holt didn't have a 1969 card given he had over 100 AB in '68. Doublely strange in that in 69 Topps depicted several players who had fewer AB or weren't even in the major leagues in 1968.

I just learned to read the WHOLE post before I go to baseball-almanac.com to look up uniform numbers. I normally click on the image to see it close up, but I didn't want to anymore of his sinus passages than I had to so I skipped it.