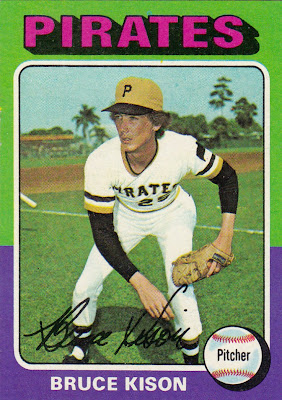 Card fact: I don't know why Bruce Kison has the black band on his left uniform sleeve. The Pirates wore a No. 21 patch in honor of the deceased Roberto Clemente during the '73 season. But I'm not sure if the band is related to that, too. It appears on at least one other card in the set.

What I thought about this card then: I pulled this card from that pack I bought at the drug store. The packs that I purchased in 1975 were so few and far between that the cards that came from them were much more special than the ones that came in trades.

What I think about this card now: Kison looks like a guy I knew in high school.

Other stuff: Kison was a tall, skinny pitcher who was a starter on two Pirates World Series champions, in 1971 and 1979. He won the first night game in World Series history in 1971. He's also known for getting married on the same day that the Pirates won the World Series in '71.

Kison moved on to the Angels after the 1979 season. He struggled with injuries his first two years. He spent his final season, in 1985, with the Red Sox.

Kison later worked as a coach with the Royals and Orioles. He was part of Orioles manager Dave Trembley's coaching staff in 2007. 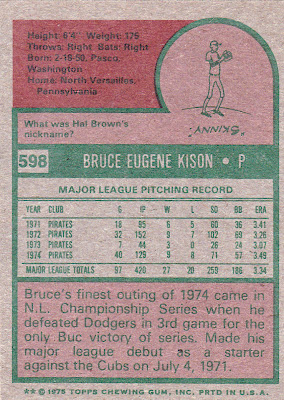 Back facts: I find it interesting that the cartoon refers to "Skinny" Hal Brown, on the back of 6-foot-4, 175-pound Bruce Kison's card.

Other blog stuff: On this date in 1975, Yankees catcher Thurman Munson's run-scoring single in the first inning against the Twins is nullified because the tar on Munson's bat handle exceeded 18 inches. The Twins won the game 2-1. This game indirectly led to the famed "pine-tar game" involving George Brett eight years later, according to Graig Nettles. Nettles said in his book that he remembered the Munson incident, and brought up the pine tar rule to Yankees manager Billy Martin, who brought Brett's bat to the attention of the umpires.
Posted by night owl at 2:12 AM

The Pirates wore the black band during spring training and the 21 patch during the regular season.

One of my favorite things about these 70's sets, is that I see a lot of guys from the '82 set and how different they looked just a few years earlier.

A little Uni Watch background on the Pirate Clemente patches.

Hal Brown had some looonnngg legs. If the cartoon is to be trusted. The image of George Brett tearing across the field with that wild look is etched into my memory.