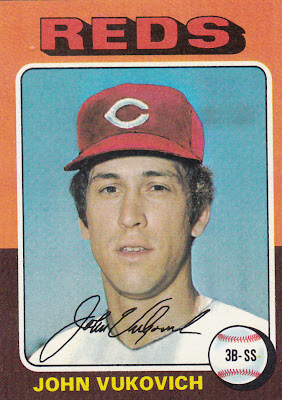 Card fact: John Vukovich is airbrushed into a Reds cap. He was traded from the Brewers to the Reds on Oct. 22, 1974.

What I thought about this card then: I never saw it. In fact, I didn't even know Vukovich existed until his final card, from 1981 Fleer. By then his career was a matter of at-bats from being over. Also, I thought he was Brewers pitcher Pete Vukovich's brother for a long time. They are not related.

What I think about this card now: The two Vukovichs don't look alike at all. I don't know what I was thinking.

Other stuff: Vukovich is associated mostly with the Phillies. He came up to the majors with Philadelphia and spent 1970, 1971 with the team. After two years with the Brewers and one with the Reds, he returned to the Phillies and stayed there the rest of his career.

Actually, he rarely played for Philadelphia the second time around. But the fans liked him.

After his career, he became a coach, mostly with the Phillies, even serving as interim manager for Philadelphia in the late '80s. His coaching career lasted almost two decades, despite being diagnosed with a brain tumor in 2001. 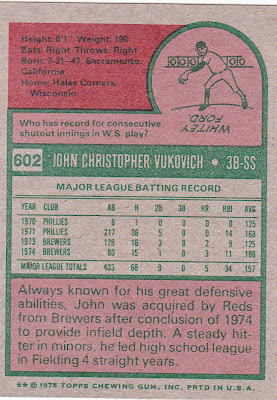 Back facts: It is almost painful when I see high school exploits brought up in the card bios of major leaguers.

Other blog stuff: The orange-brown border color combination reties the green-light green border combo for the overall lead with its 51st card.
Posted by night owl at 12:35 AM


As a Phillies' coach, Vuk was known as one of those "plays-the-game-the-right-way" old-school guys. In other words, a Dallas Green disciple.

True. His weak bat in Cincinnati is what prompted Sparky Anderson to move Pete Rose in from outfield to 3rd base.

(He was very good defensively, though.)

Vukovich had an interesting career trajectory:

--Sent back to the minors for the entire 1972 season, then traded to Milwaukee the following winter.

--Traded to the Phillies in August 1975, he would spend the next three-plus years almost entirely in the minors, playing in only 6 games at the major league level over that time, all during September call-ups. In '76 and '77, he dropped all the way down to AA.

--In 1980, Vukovich earned a spot on the Phillies' major league roster and would stick with the team all season. This marked the first time since 1975 that he had made an opening day roster (or had played in more than 10 games in he majors) and the first time since 1974 that he had spent the entire season in the majors. He played little, though -- just 49 games and 66 plate appearances.

--Vukovich was back for more of the same in '81 until the Phillies released him in late August, about two-thirds of the way through the strike-shortened season. His last appearance with the Phils was in their 67th game of the season. Up to that point he had played in 11 games and had just 2 plate appearances.

My sense is that Vukovich was considered a useful player to fill one of the last few roster spots because he could play any infield position and was regarded as a good defensive player and a good guy to have around the clubhouse. He was an incredibly anemic hitter at the major league level, though, with a career batting average of just .161.

It wouldn't surprise me if he was kept on the 1980 roster the entire season in order to qualify for a pension. I think the Phillies may have done the same thing with Dallas Green in 1967, and Vukovich was sort of under Green's wing. (Green brought Vuk to Chicago with him after leaving the Phillies.)

I didn't know until just now he wasn't related to the other Vukovichs. I think that's an honest mistake with that uncommon of a name. Also, that last statement on the back may be the most unstable one in the whole set. Topps mentions his minor league hitting as if it's connected to his HIGH SCHOOL fielding prowess. Weird.

What I like about this one is the completely illegible signature. You can find Vuke's and some other beauts right here:

Not related to Pete or George Vukovich, but maybe related to legendary two-time Indy 500 winner Bill Vukovich? John was from Sacramento and Bill was from Fresno. I’m not too familiar with California, but I think those two towns are sort of in the same area, so maybe there was some relationship.