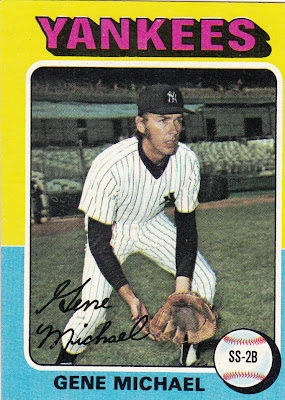 Card fact: This is the final Topps card of Gene Michael during his playing career.

What I thought about this card then: I had the mini card. Michael looked ancient to me.

What I think about this card now: It is way, way off-center and I need to fix it.

Other stuff: Michael is known for his career with the Yankees as a player, coach, manager and administrator. He had his most success as the general manager with the Yankees in the 1990s, helping build the team that won four World Series titles in five years.

As a player, Michael was signed by the Pirates, then traded to the Dodgers for Maury Wills in 1967. A year later, he was purchased by the Yankees and played for New York through the end of the 1974 season. He played for the Tigers in 1975.

Michael, nicknamed "Stick," was your typical good-field, no-hit middle infielder that thrived in the '70s. He batted .229 for his career, but knew the game, which really served him well in his front office jobs.

I remember Michael being a guest during a Yankees broadcast a few years ago. He was fascinating to listen to -- intelligent, revealing and full of stories. He should have been able to talk for the whole game. 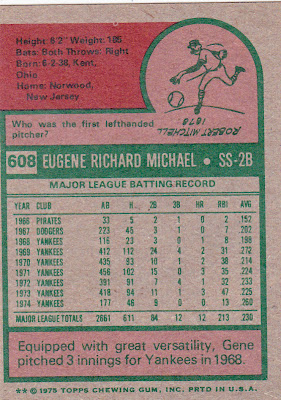 Other blog stuff: On this date in 1983, Steve Garvey's consecutive games played streak ended at 1,207 after he was unable to play in the second game of the Padres' doubleheader against the Braves. He dislocated his thumb in a collision at home plate in the first game.
Posted by night owl at 1:15 AM

I think Garvey's streak is admirable because the end of it was that Garvey didn't play a game because he couldn't, not because he chose not to. Like some people who *chose* not to play in regularly scheduled baseball games, but still maintain they played in an unbroken consecutive streak of scheduled games... not naming anyone in particular... just saying.

In 223 AB's for the Dodgers, he had an Enzo Hernandez-esque total of 7 RBI.

Was the nickname "Stick" because of his build? He's freakishly skinny looking.

I never thought of it at the time, but if you’re gonna have a guy making a fielding pose, why not have him do it relatively close to his position in the field? Here they have Gene Michael doing a shortstop pose somewhere behind home plate. A good view of the lower level Shea Stadium seats. I pretty much witnessed Michael's entire Yankee career, and it seemed they were never really satisfied with him as a their every day SS, always trying to replace him with everyone from Ron Hansen to Jim Mason to Eddie Leon, but Michael hung on for 6-7 years.