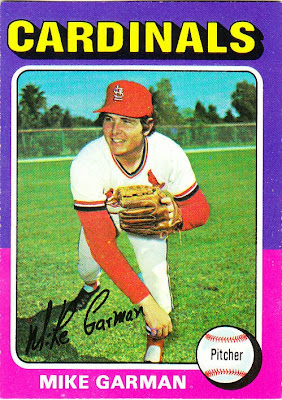 Card fact: This is Mike Garman's first solo card. He appeared on a couple of multiple-player rookie cards back in 1971 and 1972. In fact he's the "third guy" on the Carlton Fisk-Cecil Cooper rookie card in the '72 Topps set.

What I thought about this card then: I associate this card with my brother, since it's one of the first '75 cards that he had.

What I think about this card now: It's very sunny. Garman seems happy. There's lots of green. The sun seems to be shining. A perfect card to start July.

Other stuff: Garman enjoyed his best seasons with the Cardinals, appearing in 64 and 66 games in the two seasons he played for them. He came over to St. Louis in a big deal with the Red Sox. The Cardinals got Garman, Lynn McGlothen and John Curtis. The Red Sox obtained Reggie Cleveland, Diego Segui and Terry Hughes.

Garman also pitched for the Cubs, Dodgers and Expos. He went to the Cubs in the surprising (for Cubs fans) deal that sent Don Kessinger to the Cardinals. Then he was traded with Rick Monday to the Dodgers for Bill Buckner and Ivan DeJesus.

Garman pitched in four postseason games with the Dodgers in 1977 and didn't give up a run. The following season, he was dealt to Montreal and ended his major league career after the '78 season. 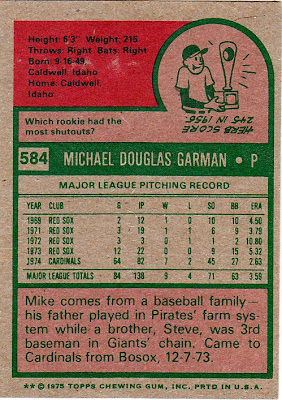 Back facts: Major gaffe in the trivia cartoon question. The question should read "which rookie had the most STRIKEOUTS." Ain't nobody pitching 245 shutouts in a season.

Herb Score still holds the American League record for strikeouts in a season by a rookie. Dwight Gooden has the major league record with 276 in 1984.

Other blog stuff: Blondie lead singer Deborah Harry was born on this date 66 years ago. 66? Wow. I sure had a thing for her when I was 14 (didn't everyone?)
Posted by night owl at 1:17 AM

That's one happy baseball card. It looks like a perfect day for baseball. I like the cartoon, except for the strikeout/shutout gaffe. That 245 shutouts would have been impressive since the ML record is 110 by Walter Johnson.

Is it just me or does the way they did the write up make it sound like his father and brother played at the same time?

"While" is often misused in this fashion. I come across it all the time in my job.

I suppose it could happen. I did see Ken Griffey and Jr. play together in Seattle. I'll bet you come across all types of grammar "mistakes", both on the job and on my blog.