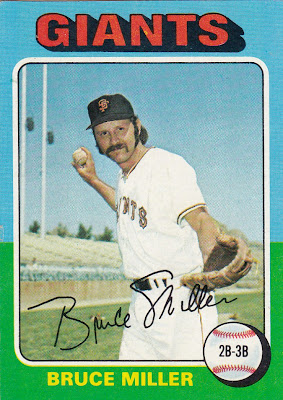 What I thought about this card then: I had the mini card. For some reason, I thought he was a pitcher, even though "2B-3B" was staring at me the whole time.

What I think about this card now: Miller looks quite friendly for someone with a bad-ass mustache.

Other stuff: Miller played four major league seasons for the Giants from 1973-76. He started with the White Sox, then was dealt to the Angels. The Giants acquired him for infielder Al Gallagher in 1973.

Miller was a part-time player. The only season he stayed out of the minors was 1975 when he .239 in 99 games for the Giants.

Miller became a teacher and school coach in his native Indiana after his playing career. 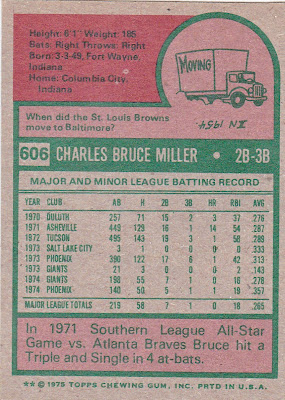 Back facts: I wonder if the cartoon, specifically the reference to Baltimore and the moving van drawing, gives any old Colts fans bad flashbacks?

Other blog stuff: '70 singer Maureen McGovern was born on this date 62 years ago. "The Morning After" is just a horrible '70s song. Of course, it won an Oscar.
Posted by night owl at 12:44 AM

nice picture of Phoenix Municipal Stadium. I have some good memories of that place.

That is an odd photo for a non-pitcher. At least for the '75 set. My first thought about the cartoon was the Colts. I'm not even a fan.