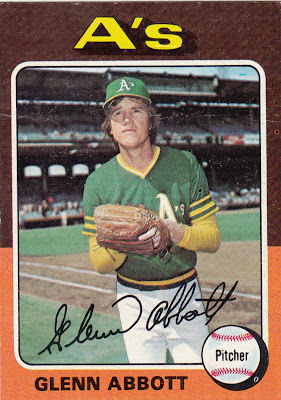 Card fact: This is Glenn Abbott's first solo card. He appeared on a four-player rookie card in the '74 Topps set.

What I thought about this card then: I didn't see this one. But Abbott's smile on his 1976 Topps card was a little alarming to me.

What I think about this card now: There aren't a lot of A's cards in the set that do not have a green or yellow border. This is only the sixth A's player card without either color in the border.

Other stuff: Abbott was a starter and reliever for the A's, Mariners and Tigers. He was selected by Seattle in the expansion draft of 1976 and was one of the team's top pitchers in its first year with the club. I always wondered what it was like to go from a team at the top of baseball, like the A's, to a brand new, lousy team like the Mariners. Must've been eye-opening.

While with the A's, Abbott was part of the first four-pitcher no-hitter as Oakland blanked the Angels on the last day of the 1975 season. Vida Blue started that game and lasted five innings. Abbott came in to pitch a perfect sixth inning.

Abbott pitched longer than any of the original Mariners, lasting through 1983. After his career ended in 1984, Abbott eventually went into coaching and is a minor league pitching coach for the Mets. 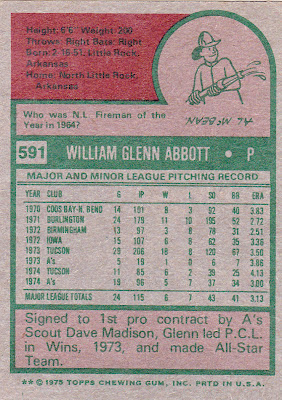 Back facts: The cartoon seems kind of random. The A.L. Fireman of the Year in 1964? McBean had a great year with the Pirates in '64, but not sure why it was worth mentioning here.

Other stuff: I have finished re-scanning the remaining cards in the set whose scans I had lost. I'm noticing the re-scans of the backs might be a little light. I'll have to tinker with that.

Also, while re-scanning, I updated the count on my total mini cards. It was all out of whack. The total is now correct in the labels.
Posted by night owl at 12:33 AM

why? because his name is Al frickin' McBean that's why.

How is it I can get so far behind, so fast? And how is it that Dave Madison rates a mention on the back? Was he a special scout or wsa Abbott that spare?