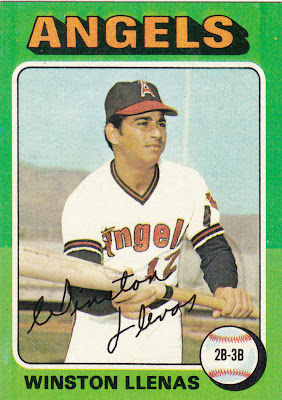 What I thought about this card then: I had the mini card, as I did with several of the Angels cards. I thought the bunting pose was cool.

What I think about this card now: Llenas is also shown bunting in his only other solo Topps card, in the 1974 set. He had seven sacrifice bunts for hits in his career. Is that enough to show him bunting in back-to-back sets?

Other stuff: Llenas started out in professional baseball when he signed as a teenager with the Kansas City A's back in 1961. He was released but a year later signed with the L.A. Angels. He played in the minors for the next six years before getting called up in 1968.

His number is retired by Aguilas Cibaenas of the Dominican Winter League, where Llenas led the team to repeated success as a player, manager, GM, and team president. 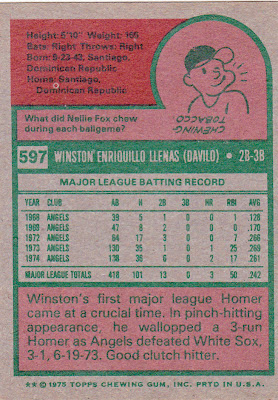 Back facts: Well, we've finally got a player displaying a "chaw," but it's a cartoon Nellie Fox on the back of this card.

Other blog stuff: The green-light green border combo has moved back into sole possession of the overall lead with its 51st card.
Posted by night owl at 12:15 AM

What a funny cartoon - what else would someone chew during a game? cud? nails?

It looks like he's got a great view of the mountains there. Does anyone chew tobacoo during games anymore? I thought I read or heard that smokeless tobacco has been banned in the minors, but I don't know about the majors.