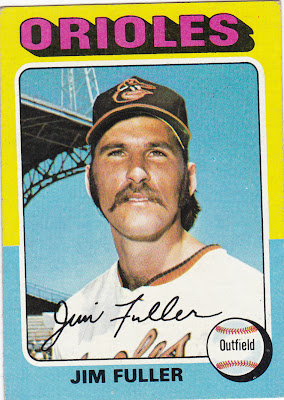 Card fact: This is Jim Fuller's only solo Topps card. This is the second straight card of a player who had only one solo Topps card, and there seems to be a large concentration of players of this nature at the end of the set -- as if Topps was trying to fill up the set.

Now, I know that this was common when Topps issued its yearly set in series. The late series included players who were late call-ups or recently traded. But the 1975 set was issued all at once, as it had been in 1973 and 74, too. It makes me wonder if Topps had some sort of order established for the set early on, in which it would fill in names for each card number and then, when it came to the higher numbers in the set, it would fill in the spots with whatever incidental players were left -- kind of like choosing sides in gym class.

I don't know if there's anything to this or not, but it's always been a question in my mind. I guess I should study the '73 and '74 sets and see if they include a significant number of "incidental" players in the higher numbers.

What I thought about this card then: I associate it with my youngest brother because he had this card. I think it was the mini card. He's an Oriole fan. He was only five at the time, so he wasn't too into cards.

What I think about this card now: The border is way off-kilter.

Other stuff: Fuller was a minor league legend for the Orioles, hitting home runs and setting records along the way. But Fuller also struck out a ton.

His most productive season in three major league seasons was 1974 when he played in 60 games, batted 189 times, hit eight home runs and struck out 68 times. In his major league career, 130 of his 315 at-bats were strikeouts and he was a career .194 batter.

Fuller played a year for the Astros in 1977, then was dealt to the Pirates in 1978. He played in the minors that year and that was the end of his pro career. 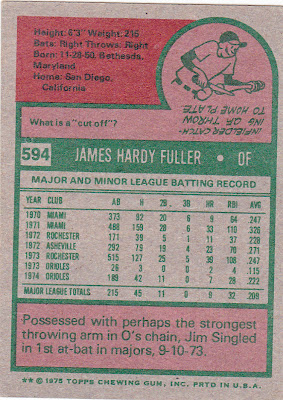 Back facts: The cartoon ballplayer looks a little too enthusiastic with that knife. Is that a bat that he is cutting? I can't tell for sure.

Wasn't 1974 the first year Topps issued their baseball set all at once?

Yeah, I guess you're right. I thought it started with '73, possibly because you never hear about hard-to-find high numbers with '73.

I sure heard about the "hard-to-find" high numbers from 1973 when I was trying to but a short stack to help finish my set.

I gave the guy his cards back and bought them from another seller.

I meant it was Fuller's only solo card. He was on one of those 4-player rookie cards in the '74 set.

That seems an odd choice for cartoons.