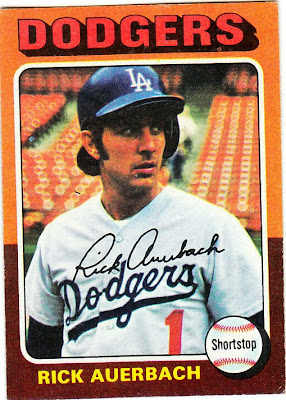 Card fact: This is the first card of Rick Auerbach wearing an actual Dodger uniform. He's airbrushed into a Dodger cap and uniform in the 1974 Topps set.

What I thought about this card then: OK, it's story time. When I was around 8 or 9 or whatever First Communion age is, I received a watch from my grandfather as a gift for the occasion. The watch had a brownish background, but when you tilted the glass toward the light, the brown would glow a deep orange. It reminded me of root beer and the orange glow the drink gives off if you have it in the right kind of glass. I claimed that the watch was "root-beer-colored." I went on a root beer kick. I coveted root beer candies, especially those root beer Bottle Caps candies. I wanted to go to the A&W drive-thru all the time.

When I pulled this card, it became an instant favorite for the same reasons. The deep orange and the brown. The orange stands in the background. It was a Root Beer card!

What I think about this card now: The adult in me sees a photo taken in Candlestick Park. Bleah. I need some root beer.

Other stuff: Auerbach came up to the majors with the Milwaukee Brewers, starting at shortstop for the young franchise at the age of 22 in 1972. He hit just .218 that season and was eventually acquired by the Dodgers as insurance for starting shortstop Bill Russell, who had some injury issues.

Auerbach hit .342 in a supporting role for the Dodgers in 1974. After a down year in '75, Auerbach was relegated to a pinch-hitting/back-up role. He wound up with the Reds (after bouncing through the Mets and Rangers organizations without ever playing in the majors for them), and hit above .300 twice for Cincinnati as a pinch-hitter.

Auerbach ended his career with the Mariners in 1981. 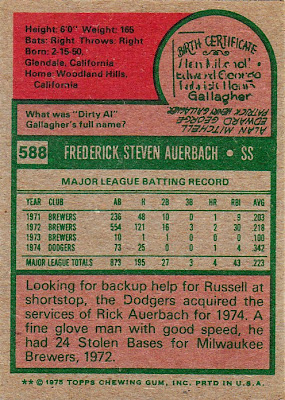 Back facts: I remember being taken aback by the cartoon because it lacked a cartoon figure in it. It was just a bunch of words! Also, I enjoy how Topps refers to "Dirty Al" Gallagher in the past tense. Gallagher may have ended his major league career in 1973, but he's still kicking!

Also, Russell apparently was so well-known to card collectors that he didn't require a first name in the write-up. By the way, the whole Bill Russell-Celtics' Bill Russell/Rick Auerbach-Red Auerbach thing was lost on me as a kid. I didn't follow basketball.

Other blog stuff: With this card, the orange-brown border combo reties the green-light green border combo for the overall lead with 50 cards apiece.
Posted by night owl at 1:40 AM

Rick looks a little ticked to be in Candlestick Park. I always thought Rick must be Red's son.

Bottle Caps. Now that brings back great memories. I use to love the grape flavored ones.