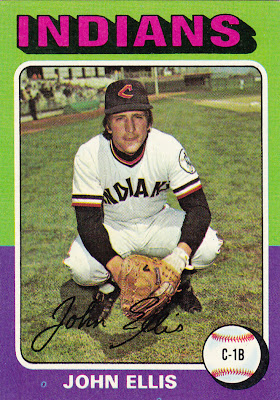 Card fact: This is the only time in John Ellis' 13-year major league career that he received a card number ending in a "5" or a "0." In 1975, he was coming off his best major league season.

What I think about this card now: It's a terrific catcher's shot. I like the background.

Other stuff: Ellis came up with the Yankees and was named to the Topps' rookie team after his 1970 season. He stayed with the Yankees for four years before he was dealt to Cleveland in the deal that brought Graig Nettles to the Yankees.

Afterward, his production faded. He would appear in more than 100 games only once more in his career. He was traded to the Rangers in December 1975 and spent the final six years with Texas, mostly in a supporting role to Jim Sundberg. 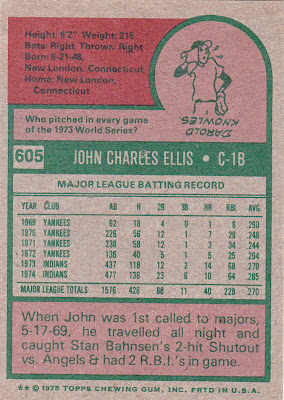 Back facts: That's a nice story in the write-up. Ellis played in the minors for Syracuse and Kinston, N.C., in 1969. The game to which Topps is referring was in Yankee Stadium, so my guess is Ellis was on the road when he got the call to the majors. It doesn't take an all-night trip to go from Syracuse to New York. I guess it's possible from Kinston, if he was driving.

Other blog stuff: The green-purple border combination has just created a three-way tie at the top with orange-brown and green-light green, all with 51 cards apiece.
Posted by night owl at 2:47 AM

I like that "C" so much better than the stupid plain "C" the Indians are wearing on their caps this year (which is also the stupid plain "C" they wore in the early 80's). If they want to go old skool about it... I wish they'd do this mid-70's version instead of lookin' like they're in 1st grade trying to write the letter C correctly to get a 100 on their test. It really bothers me.

If I ever get a wantlist for catchers, I'll have to add this one to it.

I remember when Ellis first came up with the Yankees, he was expected to become one of the young stars that would return the team to past glories. Because he was a big guy, I think they expected him to hit for more power. He wasn’t a bad player, but never came up to his early notices. On the Yankees, I think he played more at first base than catcher, but then the Yankees had Thurman Munson. But I also remember that he was my favorite Yankee in those days.