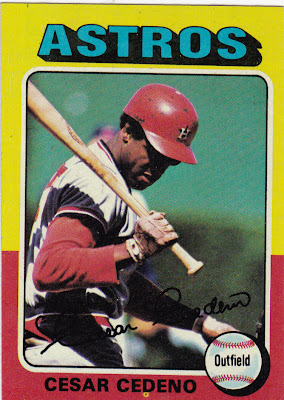 Card fact: Cesar Cedeno was only 23 at the time this photo was taken (if it was taken in 1974), and he had already appeared on five Topps cards, including receiving the coveted #200 in the 1974 set.

What I thought about this card then: I pulled it from a pack that I bought in a walk to a drug store, and it immediately captured the role as my favorite card throughout much of 1975. Cedeno was another one of those players who I wished was a Dodger. I finally got my wish -- in 1987 -- as Cedeno ended his career by playing for L.A. Unfortunately, he didn't get on a Topps card as a Dodger.

What I think about this card now: Although it's an interesting photo -- is Cedeno walking to the plate preparing mentally for his next at-bat or is he just noticing a bug on the ground? -- it is not a good photo. Shadows all over the place.

However, these were the kinds of cards we really liked as kids. And you might remember that many of the Astros photos were taken at their barren-wasteland training camp. This at least changed things up a little.

Other stuff: Cedeno is one of the first "up-and-coming" stars that I ever knew. He was part of one of those four-part "At Bat" series books by Bill Gutman. I featured the one I owned that covered the stories of Lou Brock, Rod Carew, Steve Garvey and Thurman Munson. The one I took out of the library told the stories of Carlton Fisk, Pete Rose, Bobby Bonds and Cedeno.

Cedeno was called "the next Willie Mays" by many, including his Astros manager Leo Durocher, who had managed Mays. Cedeno had power and speed and piled up the doubles early in his career. He was also a multiple Gold Glove Award winner.

Injuries caught up to Cedeno a little and after more than a decade with the Astros, he was traded to the Reds for Ray Knight. His playing time slowly decreased with the Reds, and he finished out his career with the Cardinals and Dodgers. He later worked as a coach in Latin American leagues as well as in the minor leagues.

Cedeno's career was marred by an off-season incident in 1973 in which he accidentally shot and killed his girlfriend. He was jailed briefly, charged with involuntary manslaughter. It's debatable whether the shooting affected his career, but his torrid career start ended right around this time. 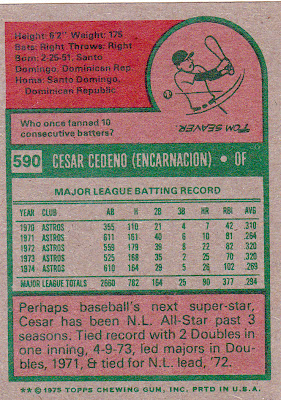 Back facts: "Perhaps baseball's next super-star ..." No pressure.

Other blog stuff: I lost all of my scans for the rest of the cards in the set. So guess what I've been doing lately? Re-scanning 70-plus cards! Weeee! I suppose it could have been worse and I lost the scans around card 143.
Posted by night owl at 12:44 AM

As a kid I was always puzzled why many hispanic players had names in parenthesis.

I seem to recall Bill James raving about how great Cedeno was.

My first thought when I saw the pic was that he was doing a little landscaping in the batter's box. I don't know if that is the answer, but I like the bug thing. I can't imagine how the incident with the girlfriend didn't have a lasting affect.

eggrocket, that is their mother's last name. typical Hispanic naming is to call you First Name - Dad's Last Name - Mother's Last Name. On baseball cards, I would guess they do it to prevent confusion, because in America it is most common to have your father's last name be the "last" name in your name.