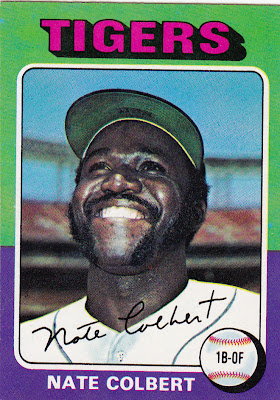 Card fact: Damn, Nate Colbert is happy to get out of San Diego! Colbert is airbrushed into a Tigers uniform after being traded from San Diego to Detroit in November 1974.

What I think about this card now: These "looking up" photos are very '70s, and really some of the ugliest cards ever. I excuse almost everything from the '70s, but not these cards.

Other stuff: I first knew Nate Colbert from his 1977 Topps record breaker card, the one that celebrates the five home runs he hit in a doubleheader against the Braves in 1972.

Colbert also finished above 100 strikeouts six straight years. He endured a lousy year in '74 as back problems cut into his production, and he was dealt to the Tigers. He spent 1975 with both Detroit and Montreal, then ended his career in '76 at age 30 with both the Expos and A's. 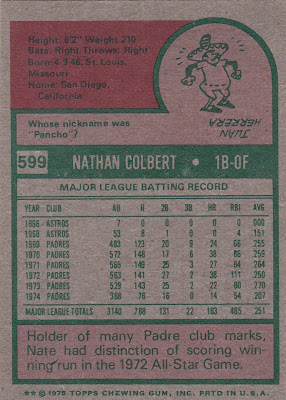 Back facts: Juan Pancho Herrera played three seasons for the Phillies in the early '60s. He likely was confused with Jose Loco Herrera who played four seasons for the Astros and Expos in the late '60s.

Other blog stuff: The green-purple border color moves into a tie for second place with the orange-brown border color with this card. Both have 50 cards apiece and are one behind overall leader green-light green.
Posted by night owl at 3:24 AM

(Juan) Pancho Herrera also had one of the rarest error cards of the entire Topps era in 1958.

I'll bet you wouldn't find many people happy to be going from SD to Detroit now. Still, he looks exceedingly happy, almost as if the "looking up" shot got rid of an extra chin or something.

38 years later and Big Nate's 169 pre-steroid dingers still hold up as the franchise record. That's testament to the fact that, with the exception of hometown hero Tony Gwynn, the friars just can't/won't shell out the bucks to keep the big names in town.