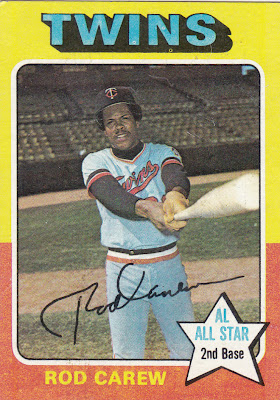 Card fact: This is the very last card I needed to complete the 1975 Topps set.

What I thought about this card then: My brother had it and it was a very cool card. Carew's bat looks at least 70 feet long.

What I think about this card now: Carew wasn't exactly known as a slugger. I associate this pose with sluggers.

Other stuff: Carew was another one of the first baseball superstars that I knew. He seemed to have a lot of fans among my friends, which was a bit odd, because there isn't anybody in my state that knows a thing about the Twins. But I remember his 1976, 1977 and 1978 cards as being very coveted.

Of course, Carew is a Hall of Famer, hit .388 in 1978, was the rookie of the year in 1967, a member of 18 straight All-Star teams, and a member of the 3,000-hit club. He was also the subject of one the first baseball biographies I ever read. I have known the story about him being named after the doctor who delivered him on a train since I was a wee lad.

He later became a hitting coach for the Angels and the Brewers. 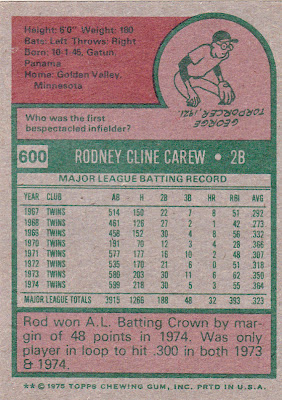 Back facts: When I was a kid I thought that George Torporcer was kneeling on the ground looking at bugs. He needed his glasses to get a good look at the bugs! That's how little boys think.

Carew fills the second base spot for the American League:


Some of you may be thinking, "only one more All-Star and the teams are complete!" Well, as one commentor already gave away way back 300 cards ago, there will be no more All-Star cards.


Topps did not give Reggie Jackson an All-Star card in the 1975 set even though he was the starting right fielder for the American League in the 1974 All-Star Game. So the one outfield position in the A.L. is forever left blank because of Topps' goof.
Posted by night owl at 3:37 AM

Carew's bat probably really was 70 ft long! That would explain all the hits!

Hey thanks for the shout out, Night Owl. It's good to see the All-Star cards completed in your rundown. As another interesting sidebar, I was always struck by the use of the red/yellow border combination for the AS cards. It was always interesting to me that many other stars who weren't ASG starters also have the red/yellow border (Jenkins, Carlton, Tiant, Gibson, Wilbur Wood among others).

So I eventually began to associate that color combo with the great players in the set, and would always get excited when I shuffled through a new set of cards and saw the r/y border - it surely meant I had just picked up another highly desired card. At least until the day I saw Rudy Meoli with the vaunted border, and realized that my surefire system was fatally flawed.

Even so, the 75 Topps set is to me the high point of sports card sets in my lifetime - best card design, best group of players, and most personally nostalgic.

Carew was one of those guys that I marveled at as a kid because he got so many hits. As a Rangers fan in the late '70s and 80's I wanted someone to come and hit like that for "us". I was a little suprised to see he was the only .300 hitter in both '73 and '74.

Congrats on getting to another milestone number and it just reminds me how close you are to finishing.