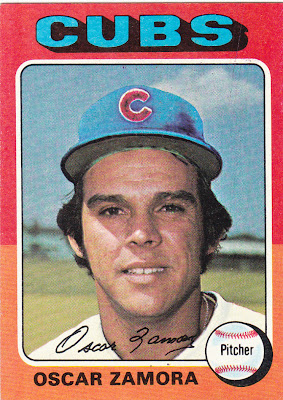 Card fact: This is Oscar Zamora's rookie card. Despite that, he is airbrushed into a Cubs cap. He was purchased by the Cubs from the Astros in June of 1974.

What I thought about this card then: I had the mini card. I don't recall thinking much of it. I do remember my brother being horrified by his 1978 Topps card (it's just a big head shot of Zamora airbrushed into an Astros cap, nothing to get worked up over).

What I think about this card now: I'm just realizing that the familiar barn-like baseball facility that appears on a lot of Astros cards in this set is in the background of the photo on this card. So Zamora was definitely an Astro in this photo.

Other stuff: Zamora may have appeared on his first card in '75, but he had been pitching professionally in the minors since 1965, with the Indians and Astros organizations. He finally broke through with the Cubs and didn't do too badly for a poor club.

Zamora's success declined in '75 and '76 and he returned to the minors. He was reaquired by the Astros for the 1978 season. After that he pitched in sporadically in the minor leagues.

Zamora was one of just four Cuban natives to appear in major league baseball during the 1970s. 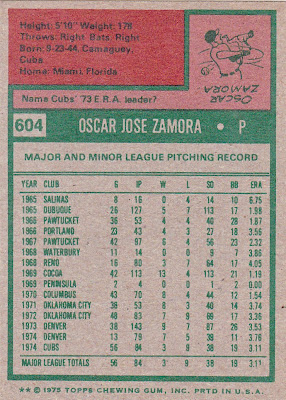 Back facts: Zamora is the subject of the cartoon on the back of his own card. But Topps botches the honor by screwing up the year. Zamora led the Cubs in ERA in 1974. He was in the minors in '73.

Other blog stuff: I'll stay with the Chicago theme. On this date 57 years ago, "Sweetness" Walter Payton was born.
Posted by night owl at 2:52 AM

Just when I think I'm caught up...

I wonder how many players in this set are featured in a cartoon on their own card. It can't be that many.

Awesome back ... square cartoon border because of cramming in so many stats and the answer to his own trivia question. That's superstar treatment.