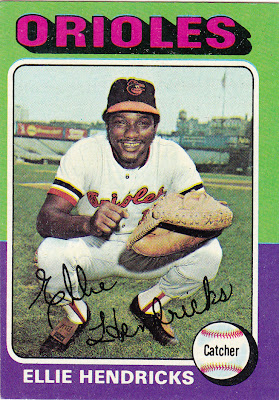 Card fact: Ellie Hendricks returns to the Topps set with this card. He did not appear in the 1973 and 1974 sets.

What I thought about this card then: I remember seeing a mangled mini version of the Hendricks card, but I couldn't tell you whether it was owned by me, my brother or a friend.

What I think about this card now: Hendricks gets progressively happier in his cards through the years (really, take a look). This is one of his final cards, and you can see he is quite happy.

Other stuff: Hendricks was an enormously popular Orioles player, who is credited as one of the keys to Baltimore's impressive pitching rotation of the late '60s and early '70s. He was known as a great handler of pitchers and was at his most active between 1969-71 when the Orioles went to the World Series each year. He was involved in a famous controversial play in the 1970 World Series in which he collided with the home plate umpire and Reds runner Bernie Carbo on a play at the plate.

Hendricks was dealt to the Cubs in 1972, but returned to the Orioles the following year, as more of a third-string catcher. He didn't hit much at all -- batting .220 for his career -- and was traded again to the Yankees in the huge nine player deal on June 15, 1976.

He returned again to the Orioles in the late '70s as a player-coach. He then moved on to be a bullpen coach for Baltimore for 28 seasons, and was the longest tenured active coach for a period.

Hendricks died of a heart attack just shy of his 65th birthday in December 2005. 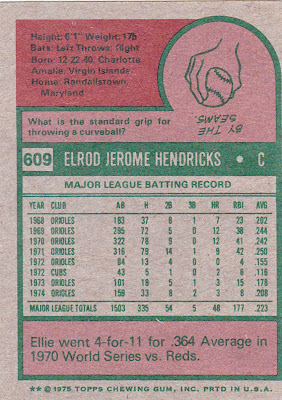 Back facts: Hendricks hit a home run in Game 1 of the 1970 World Series, the same game in which he was involved in the controversial play.

Other blog stuff: The green-purple border combination ties the orange-brown combination for first place with its 52nd card.
Posted by night owl at 12:41 AM

Hendricks got his two cub homers in the same game:

I have that one! That's a great shot. RIP Ellie.