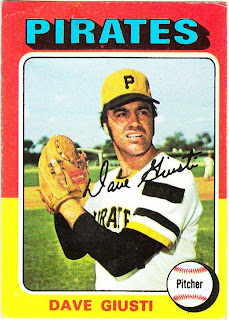 Card fact: This is the second pitcher from Upstate New York featured in the set. I'm sure nobody cares about that but me.

What I thought about this card then: Missed it. I also didn't pull his final two cards from the '76 and '77 sets. As a result, I was totally unaware of Giusti's career.

What I think about this card now: What the devil is that black piece of material stuck to his left shoulder?

Other stuff: Giusti is something of a hero among old-timers in Central New York. He pitched Syracuse University to the College World Series in 1961. That was back when SU had a baseball team. Now, the college proudly features sports that make me snore. 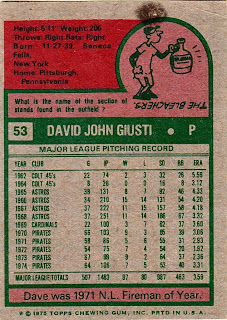 Back facts: (Looks like someone tried to put out a cigarette at the top). A couple of things about the cartoon:

a) The font for the question is different than in the other cartoons. The question must have contained too many words.

b) The player in the cartoon appears to be carrying a jug of some sort, which I thought a curious choice of illustration. Upon closer inspection, I can barely make out the word "bleach" on the jug. Get it? "Bleach," "bleachers"? Wow, that's a stretch.

I'm in upstate NY, I care

I think the bleacher creatures used a fake "bleacher" label to sneak their moonshine into the stadium.
Was he injured in '63?

It's gotta have something to do with Clemente?