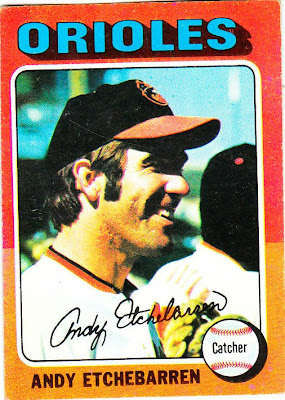 Card fact: This is Andy Etchebarren's final card as an Oriole. He spent 12 season with Baltimore before being signed by the California Angels in 1975.

What I think about this card now: One of the cards of Etchebarren that presents him in a kinder light. Some of them (I'm thinking '73-74 and '76-78 Topps) made him appear as if he was Herman Munster's more athletic cousin.

Other stuff: Etchebarren was a fixture behind the plate during the Orioles' peak years of the late '60s and early '70s. He exchanged starts with Elrod Hendricks through much of that time and later teamed up with Johnny Oates and Earl Williams for the O's.

Etchebarren didn't hit much, but he had a decent on-base percentage for a .230 hitter and knew how to draw a walk. And, obviously, he knew something about handling a pitching staff, given who Baltimore had on the mound at the time.

After his career ended in 1978, Etchebarren worked as a coach with the Milwaukee Brewers. He then returned to the Orioles and managed and coached in their minor league system until three or four years ago. 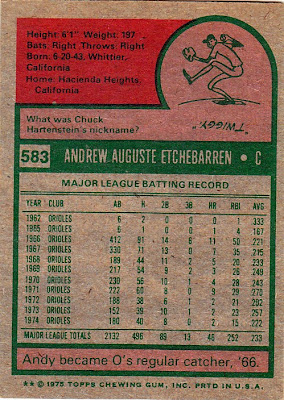 Back facts: The cartoon reads like Chuck Hartenstein was no longer with us in 1975, or at least retired. But the joke would be on Topps. After seemingly finishing up in the majors in 1970, "Twiggy" returned to pitch 13 games for the expansion Blue Jays in 1977.

Other blog stuff: The movie "Willie Wonka and the Chocolate Factory" debuted on this date in 1971. "If she's a lady, I'm a Vermicious Knid."
Posted by night owl at 12:34 AM

I love the original Wonka. Is it a coincidence that Etchebarren's middle name is Auguste and one of the Wonka characters was "Augustus" Gloop? I think not.

This was one of the handful of 75's that escaped me until much later when I finished the set.