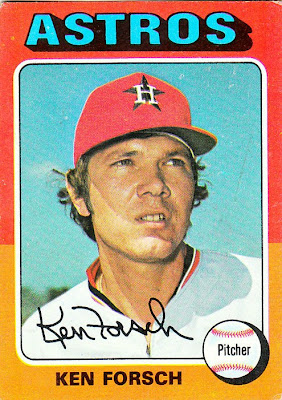 Card fact: This is the second group of baseball-playing brothers featured on this blog. The first two were Ken and George Brett. There will be more by the time this blog is done.

What I thought about this card then: I had the mini card, but I didn't think much about it. You can only come up with so many thoughts about a head shot.

What I think about this card now: When Topps got the colors of the borders to match with a team's colors, it had itself a great card. Red and orange is perfect for the Astros.

Other stuff: Ken Forsch was the oldest of the Forsch brothers. Ken arrived in the majors in 1970, and his brother Bob came up in 1974. Both pitched for 16 seasons in the majors, and both pitched a no-hitter in the major leagues. They are the only brothers to do that. Ken pitched his no-hitter against the Braves in 1979.

Forsch later was traded to the Angels for Dickie Thon and delivered three straight double-figure win seasons for California. Forsch was basically a .500 pitcher for his career, but he didn't walk a lot of people. He played for several mediocre teams and didn't enjoy the postseason success that his brother did.

Forsch is now the assistant general manager for the Angels. 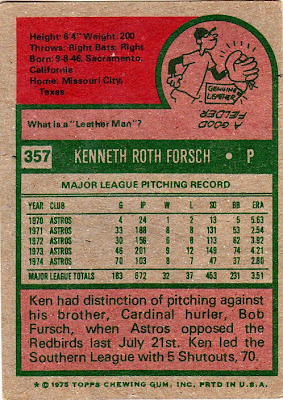 Back facts: Ken gets a cool middle name like "Roth," while his brother got the middle name "Herbert."

Other blog stuff: On this date, Mickey Rivers was born. A Halloween baby, he is 62 today.
Posted by night owl at 3:05 AM

Typically with brothers you have one that is great and the other that is, well the brother of a great ballplayer. The Forsch bros were def the most evenly talented brother tandom that I can think of...

I had a hard time keeping them straight.

I still have a hard time keeping them straight.