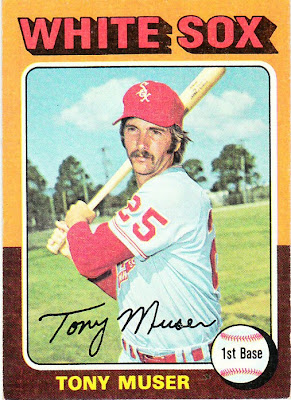 Card fact: This is the final Topps card featuring Tony Muser as a White Sox player. He was traded to the Orioles in the middle of the 1975 season.

What I thought about this card then: This was another one of those cards that I saw both in regular form and in mini form (I had the mini card). In fact, it seemed every kid I knew who collected cards in 1975 had the Tony Muser card. It was just always there.

What I think about this card now: I'm sure there have been some teams that have worn the "TV" numbers on the sleeves of their uniforms recently, but I don't remember them being as large and apparent as they were for the White Sox in the '70s.

Other stuff: Muser was a part-time, role-player kind of a first baseman, mostly with the White Sox and the Orioles. He was given the starting first base job for the White Sox in 1973, and his wikipedia page almost laughingly mentions Muser's career highs of 4 home runs and 30 RBIs that year.

Muser was more of a contact hitter and solid fielder. But as his time with the Orioles progressed, he stopped hitting. He spent 15 games with the Brewers in 1978 and that was that. He became a coach and eventually worked his way up to managing the Royals for five years. He is now an instructor in the Padres organization. 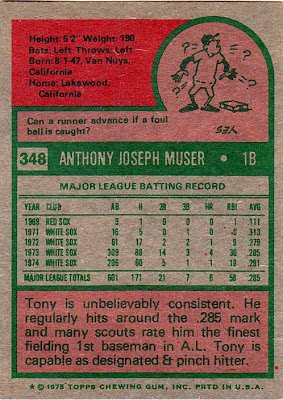 Back facts: OK, I must address the write-up.

He's not just "consistent," but so consistent that you cannot believe it. And what is the proof that he is consistent beyond belief?

Well, I'm sorry. If someone is going to be UNBELIEVABLY consistent, then they must hit .285 on the nose every time. Not "around," not "regularly," but every time and always.

Other blog stuff: The orange-brown color combination has just broken a two-way tie at the top with "pink-yellow" to be the overall color combination leader, so far, with 33 cards.
Posted by night owl at 12:52 AM

This blog is "unbelievably" consistent. Mr. Muser was "around" the .285 mark in the season prior to and after he hit .285. Big whoop.

I can't believe Earl Weaver wanted him. Well, he did play good defense, but he didn't walk and didn't hit home runs. He was a slappy.

The problem was when he was in KC, he loved slappys. Thus, he loved losing.

The last team that I remember wearing TV numbers was the Phillies in the 1990s...but no, they weren't that big.

Unbelievably uninteresting fact: Tony Muser appears on a 1988 Topps card. He and Glenn Braggs are pictured on the Brewers team leaders card, for some reason.

Muser was pushed out of Chicago by future star (okay, future favorite of mine) Mike Squires. Okay, maybe not, but when I was young, I saw it that way.

And what player is most similar to Mike Squires? Tony Muser, of course.

MJ-Now that is too funny. As a kid, those would be fighting words.