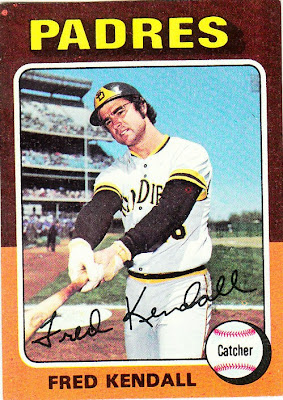 Card fact: I am regretting now that I did not add a label for players wearing glasses. That would have been a nifty fact today.

What I thought about this card then: Never saw it. The first Fred Kendall card I knew was his 1977 Topps card. We thought Kendall looked like a weird little gnome.

What I think about this card now: Kendall appears to be swinging a bat in a major league stadium, yet the grass doesn't look terribly well kept. Groundskeeping then just wasn't what it is today.

Other stuff: Fred Kendall was a member of the original 1969 San Diego Padres team. He was the last original member of the club, playing for the Padres for seven years until he was traded to the Indians in 1976 in the deal that brought George Hendrick to the Padres. A year later, he went to the Red Sox in the Dennis Eckersley deal.

Kendall was known as a good defensive catcher and a strong handler of pitchers. His hitting was only fair, as was customary of many catchers then, despite the arrival of Bench, Simmons, Sanguillen, etc.

After his career, he worked in sales and also was a coach in the minors and majors. I remember him as the manager of the Utica Blue Sox in the early 1990s. Kendall is the father of current Royals catcher Jason Kendall. I'm embarrassed to say that I didn't know Jason Kendall's father was Fred Kendall until halfway through Jason's career. 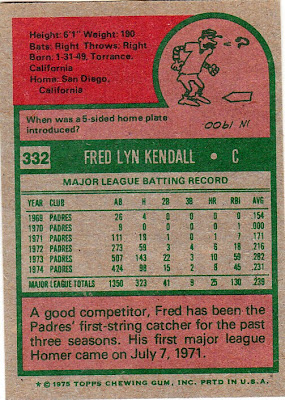 Back facts: I am assuming that home plate, prior to having five sides, was a square? I'm too lazy to look it up.

Speaking of laziness, it seems Topps couldn't find a lot to say about Kendall. "A good competitor"? Citing his first major league home run four years prior? I'll help out and add a bit more info: Kendall was voted the Padres' most valuable player in 1973. There you go.

Other blog stuff: With one day left in the voting, it looks like the brown-orange combo, which is featured here, will be called the "Reese's Peanut Butter Cup" combo. A good choice. I can see the Reese's wrapper when I look at the Kendall card.
Posted by night owl at 12:56 AM

As an A's fan, my only beef with Fred Kendall is the fact that he produced Jason Kendall, quite possibly the sorriest hitter who ever lived, dollar for dollar.

Jason Kendall is the tale of 2 careers. His first part was excellent. His second part, eeeks. Still, the overall numbers will end up looking a lot better than the actual output.