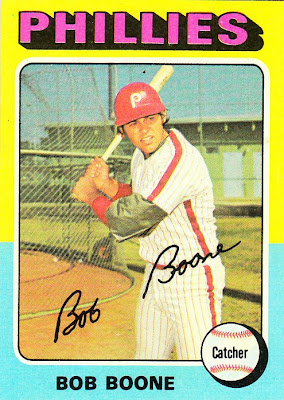 Card fact: This is the 19th player featured in the set so far that had at least one son play major league baseball (Bob Boone had two). I never realized how common this was until I started keeping track of it on this blog.

What I thought about this card then: The Boone card is one of the first cards that I saw that was not part of mine or my brother's card collections. It was part of a group of cards that I acquired in a trade with a friend. It instantly became one of my favorites. I'm not sure why. It probably had something to do with the helmet Boone is wearing.

What I think about this card now: The olive-green warm-up jacket that Boone is wearing stands out. In fact, it blends in quite well with the photo background.

Other stuff: Boone is part of a three-generation major league baseball family. There have been just two others in MLB history (the Bells and the Colemans are the other two). His father Ray played the infield for the Indians and Tigers in the '50s, and his sons, Bret and Aaron, played the infield for a whole mess of teams over the last two decades.

Boone enjoyed a lengthy playing career himself, catching mostly for the Phillies and Angels (and the Royals at the tail end of his career). He was undoubtedly my favorite non-Dodger catcher. He hit fairly well for Philadelphia and was a three-time All-Star. After his hitting tailed off in the early '80s, he was acquired by the Angels and was part of the team's rise as a legitimate playoff contender. Boone won seven Gold Gloves, five with the Angels.

Boone hit .311 in the postseason, playing in a whopping 36 playoff games, and was part of the 1980 Phillies championship.

After his playing career, he became a manager for both the Royals and Reds, but didn't have much success with either team. 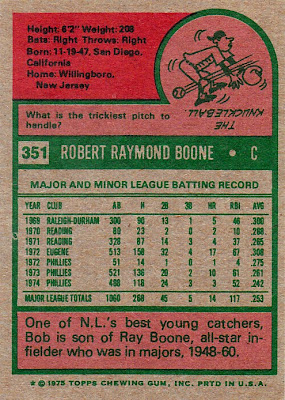 Back facts: The best part of seeing complete stats on the back of baseball cards is getting to know the minor league affiliates of major league teams. I was totally aware that Reading, Pa., and Eugene, Ore., were affiliates of the Phillies in the '70s based on my reading of card backs.

Other blog stuff: On this date in 1908, the song "Take Me Out to the Ballgame" is introduced to the public for the first time.
Posted by night owl at 12:42 AM

I remember hearing at some point in my childhood that Boone's father was a Major Leaguer and being amazed that a father and son made it. It's still impressive now to think of the talent extending to the next generation and to know that three generations of made it is incredible.

That pitch in the cartoon looks more like a sinker than a knuckleball, but that's just me.

The Hairstons are 3 generation also.

Useless trivia: Two of the four three-generation MLB families feature three generations of players with the same first name (all three were not necessarily known by that name or a nickname derived from it), but a different middle name:

--Gus, Buddy and David Bell all have the first name David. Gus and Buddy each went by "generic" nicknames that do not appear to be derived from their real first or middle names. Gus' middle name was Russell, while Buddy's is Gus. (David's middle name is Michael.) In this type of situation, you wouldn't be surprised to see the grandson go by something other than "David", if his father and grandfather already had that name (as with the Colemans). But that wasn't the case here, as neither the father or grandfather actually went by "David".

I can still make my dad laugh with my impersonation of the Cubs' announcer in the 70s Jack Brickhouse (who didn't seem to talk a lot or say anything particularly interesting)...

Okay, it's probably only funny to my dad and brother, but it's interesting how a person hangs on to little stuff like that.

I wonder if Topps will ever do a "grandfather/father/son" subset.