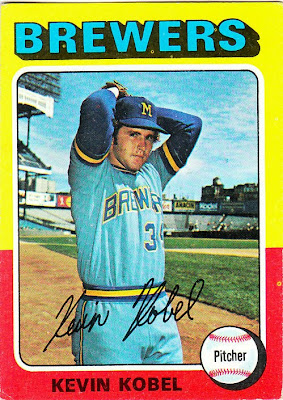 What I thought about this card then: I didn't see it. The first card of Kevin Kobel's that I saw was his 1979 Topps card. For some reason, I pulled that card a lot that year. (It wasn't one of the double-printed cards in the set either).

What I think about this card now: It's a pleasant, sunny day at Yankee Stadium. That Anacin ad appears a lot in the background of baseball cards.

Other stuff: Kobel played parts of six seasons in the major leagues between 1973-80. He was a starter mostly in 1974 and 1977. He spent the other years primarily as a reliever. Kobel received the most decisions of his career in 1974 when he went 6-14 for the Brewers with a 3.99 ERA, pitching a career record 169 innings.

Kobel was purchased by the Mets in 1977. After a solid season as a reliever and periodic starter in 1978, he was made a starter for the '79 season, going 6-8 with a 3.51 ERA in 27 starts. Kobel was traded to the Royals in the middle of the 1980 season, but never played in the majors again. 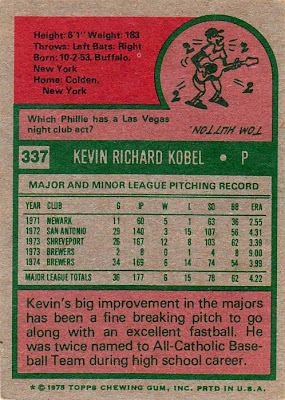 Back facts: A couple of things. First, I am always interested in any ballplayer who is from Buffalo. You'll note the back reads that Kobel's hometown is Colden. That is a small speck of a village south of Buffalo, in snowbelt land. It's also close to where Kobel went to high school at St. Francis.

The other thing is we have seen this cartoon before. It's the exact same cartoon that appeared with this card. That was just 14 cards ago! I never knew that any of the cartoons were repeated in this set until I posted this card. I must admit I'm a bit disappointed.

Other blog stuff: The No. 1 song in the country on this date in 1975 was "Bad Blood" by Neil Sedaka, which also featured Elton John. I never understood why this song was popular. I mean there was a lot of bad music in the '70s, but this song wasn't even catchy. I didn't get it.
Posted by night owl at 12:55 AM

The All-Catholic Baseball Team? Twice? That's cool I guess. I see he spent some time in San Antonio. I wonder how he liked the heat compared with "snowbelt land". I'll bet it was quite a change.