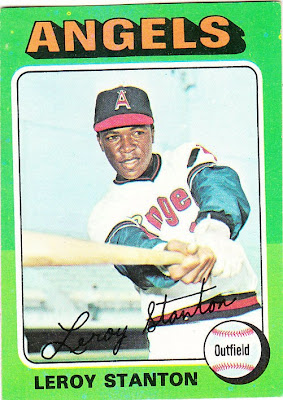 I had the mini version of the Leroy Stanton card first. When I saw the regular-sized version if Stanton, it practically blew my 9-year-old mind.

What I thought about this card then: This was my favorite Angels card in the set. It was also one of my favorite cards in the set, period. I liked the batting pose.

What I think about this card now: The jacket under the uniform is obvious, but we didn't give it a thought as kids. It never seemed strange.

Other stuff: Stanton started out with the Mets, but came over to the Angels in the deal that also brought Nolan Ryan to California in exchange for Jim Fregosi (I mentioned this trade just four cards ago). Stanton had five productive seasons for the Angels.

He was selected by the Mariners in the expansion draft, and became one of the team's leading sluggers (along with Ruppert Jones and Dan Meyer) with 27 home runs and 90 RBIs in 1977, Seattle's first season. The next year, Stanton hit just .183 with three homers, and that was his final season. 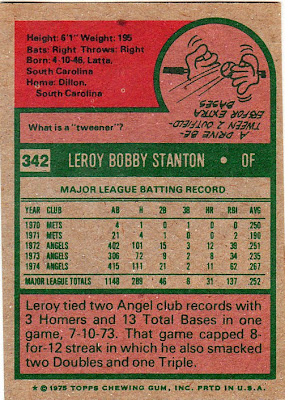 Back facts: The cartoon is etched in my brain, but I haven't hard the term "tweener" in decades.

Also, this is the second straight time that the card write-up mentions a very impressive game by the player featured.

Other blog stuff: Here is the mind-blowing regular-sized card and mini-sized card, side-by-side: 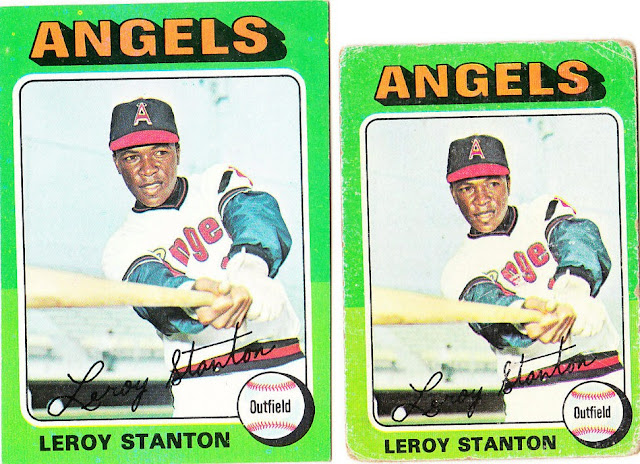 Ever considered putting the '75 Mini Set together since you've completed the regular-sized version?

I've always considered it, but it's never been a major collecting goal of mine, just because it seems a little difficult.

But I do enjoy gaining '75 minis quite a bit. I always say the '75 mini set connects me better to my childhood than any other set.

Since it came up, how many '75 minis do you have?
That is a nice pose and a fairly level background.
Nowadays, it you have a drop off like he did from '77 to 78, people say you stopped juicing.

Funny you should mention "juicing" as I mentioned it in the post I just published.