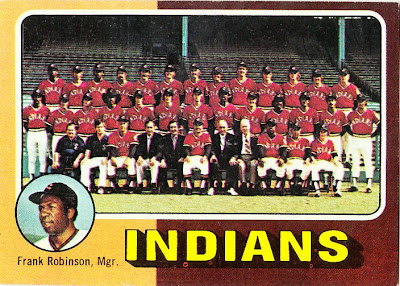 Card fact: Frank Robinson's inclusion on the team card was likely a late addition by Topps as Robinson was not named player-manager of the Indians until after the 1974 season. In fact, I just missed posting this card on the anniversary of Robinson being named the first African-American manager in baseball. It happened on Oct. 3, 1974.

What I thought about this card then: Nothing. It's a boring team card.

What I think about this card now: It amuses me to no end. Not only are the Indians dressed in their wild red jersey tops with the old Municipal Stadium as a backdrop, but you have guys in suits seated in the front row while Oscar Gamble's giant 'fro hovers behind them (he's fourth from the left in the middle row -- as if you could miss him).

To me this card represents the '70s perfectly. The changing of the guard. The old suits seated with the long-haired freaky people. It's great.

Other stuff: The long-suffering Indians had just endured their sixth straight losing season in 1974. They fired Ken Aspromonte after his third losing season and installed Robinson as player-manager. Robinson had just been acquired by the Indians in a trade with the Angels a month before being selected manager.

Robinson would help Cleveland to its first winning season since 1968 when the Indians went 81-78 in 1976. But Robinson was replaced by Jeff Torborg in the middle of the 1977 season. 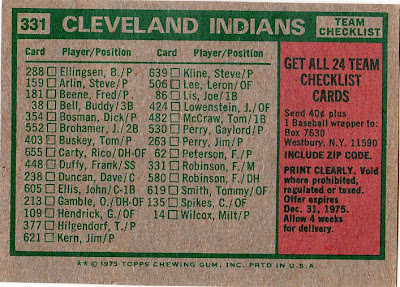 Back facts: I enjoy Frank Robinson being listed twice on the checklist. He has a card as a manager and one as a designated hitter. That's cool.

Also, Bruce Ellingsen's name is listed out of alphabetical order, which makes me think he was a late inclusion in the set (his capless photo is a giveaway, too).

Other blog stuff: OK, let's see how well Topps did representing the Indians team from 1974.

The Indians used 45 players in 1974, which is tied with the Angels as the most players used among the teams featured so far. Topps has cards of 27 of them as Indians in the 1975 set. Plus, there are a whopping five other players from the 1974 team -- Chris Chambliss, Jack Heidemann, Dick Tidrow, Cecil Upshaw and Ken Sanders -- who are featured in the set with other teams.

So this is where the Indians rate in terms of percentage of '74 players represented in the 1975 set:

Torres had 150 at bats, but he actually played in more than 100 games (108, to be exact); I'm guessing that he was used primarily as a late-inning defensive replacement. He was one of the players traded away in the late-season deal for Robinson, so if he had been included in the '75 set, it would have been as an Angel. You have to wonder if he was on the bubble to be included, and the need to airbrush him onto a new team was a factor weighing towards cutting him from the set.

In any event, Topps called things right. Torres did not play in the majors in 1975, spending the whole year at AAA. Maybe there was some reason (not readily apparent to us today) why Topps felt that the Angels would not keep him on their major league roster in '75.

As for Johnson, he was claimed off waivers by the Rangers in July, and spent the rest of the season in the minors. It would have been surprising if he had gotten a card in the '75 set.

Any chance to get another look at Oscar's fro is fine with me. You get a great idea of how big his fro is in that shot.

Can anyone catch those blasted Tigers? (Cue dramatic music).

How could I not like a player named Charlie Spikes. I didn't have the 75T, but I did have a 76 and 77 which I really liked despite never watching Spikes and the Indians and knowing next to nothing about them.