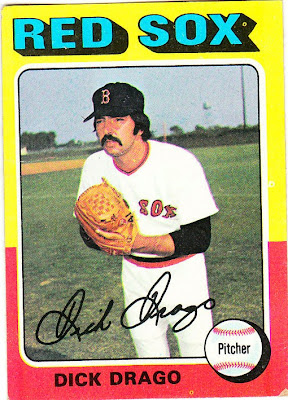 Card fact: The only ballplayer in the set that also doubled as a secret agent. ... OK, I made that up. But doesn't he look like a secret agent? And that name! That has to be the name of someone in a spy novel.

What I thought about this card then: Did not see it. However, Dick Drago's 1976 Topps card is the first double I ever had. What a unique moment that was to have TWO of the same card! Today, I have 25 of the same card, and I don't bat an eye. I'm so spoiled.

What I think about this card now: Is that a water tower in the distance?

Other stuff: Drago was an original Kansas City Royal, serving as one of their primary starters in 1969 (I guess you could call Wally Bunker the ace of the staff that year). He remained a starter for the Royals for five years, then was traded to the Red Sox for Marty Pattin. From that point, he became a relief pitcher, coming out of the bullpen for Boston, the California Angels, Baltimore, Boston again and Seattle. His biggest claim to fame may be that he gave up the final home run of Hank Aaron's career.

Drago's career ended in 1981. Afterward, he ran into tax and child-support issues, but apparently that's been smoothed over.

By the way, I always get Drago and Diego Segui confused, which is why I keep thinking Drago had a son that played major league baseball. But he didn't. You hear that, brain? 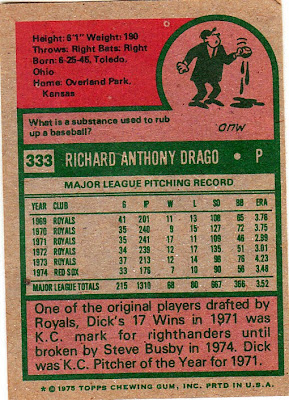 Back facts: I remember being confused as to why baseballs were rubbed with mud. It seems like a practice we should have moved past by now.

Other blog stuff: In keeping with today's Red Sox theme, on this date in 1975, the Red Sox clinched the American League Championship Series against Oakland with a sweep, punctuated by Carl Yastrzemski's two hits and two standout plays in the outfield.
Posted by night owl at 1:13 AM

I've always thought the same thing about the mud. Here is a link to the baseball mud site:

Great blog. I stumbled on it a few weeks ago and enjoy reading about the cards I collected as a kid. I was 12 in ’75 and finished the set by hand. Still have them. I remember Dick Drago for the same reason you do. He was my first double, too. In 1970, he must have been in every pack my dad purchased for me. George Mitterwald also. That's when cards were issued in series and chances of doubles were much greater.

Anyway, keep up the good work. This blog is a fun read.

In my mind when I see a mid to late 1970s Red Sox card I often hear the Fenway Park PA announcer from that era announcing the player in his monotone voice.

The mud takes the sheen off the white leather and makes the ball easier to grip. it is a vital part of the major league baseball experience.

this seems like the kind of ancient trivial nonsense you'd enjoy