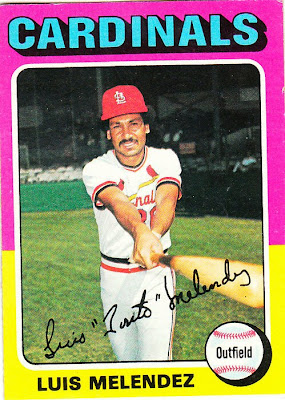 Card fact: The "pink-yellow" color combo, which hasn't been featured since the league leaders cards, has returned to rejoin the "orange-brown" combo for the overall lead with 33 cards apiece.

What I thought about this card then: Never saw it. In fact, I know extremely little about Luis Melendez.

What I think about this card now: I can't make out what Melendez signed between "Luis" and "Melendez." But his nickname was "Torito," or "little bull." That must be it.

Other stuff: Luis Melendez was a promising outfielder in the Cardinals organization but didn't live up to his billing. He had semi-decent, 300-at-bat seasons in 1973 and 1975, but was finished with his playing career in 1977, six years after it began.

Melendez played in the Puerto Rican Winter Baseball League and went on to manage there after his playing career. He then became a low-level minor league manager for the Cardinals and the Phillies, managing the Batavia Muckdogs of the New York-Penn League in 2003 and 2004. Batavia is not too far from me.

He is now a manager for the Gulf Coast Phillies. 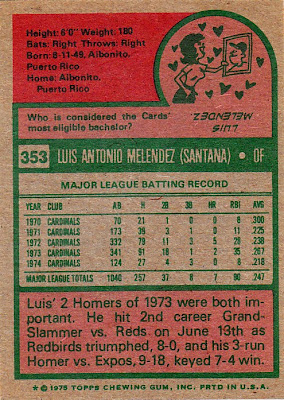 Back facts: This is one of the most hilarious cartoons ever. Who wrote this cartoon, Luis Melendez?

Other blog stuff: On this date in 1991, Jack Morris pitched one of the best games I've ever seen, throwing a 10-inning, 1-0 shutout in Game 7 of the World Series against the Braves, to lead the Twins to the title.
Posted by night owl at 2:03 AM

That cartoon is hilarious. I wonder if the editor or whoever chose it had some affinity for the Cards. How many cartoons refer to the player whose card they appear on?

Also, how important was that grand-slam if his team won 8-0?

I always loved those "eligible bachelor" cartoons. How do you measure "most"? Anatomically (that would be a little too R-rated for the kids)? Looks? Income? Ride (Melendez looks like a Camaro fuzzy-dice guy)? Maybe he was just the only single guy on the team.

By the way,speaking of great post-season pitchers, it was just reported that Yankee fans spit on Cliff Lee's wife during his last stadium win. That's why I don't go to Yankee Stadium any more.

Great cartoon.
MOST eligible? Isn't a person either eligible or not eligible? That's like saying something is "more unique" than something else.