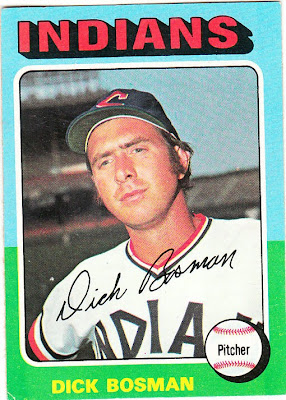 Card fact: This is the final card of Dick Bosman as a Triber. He would be traded to the A's in 1975 and end his career in Oakland in 1976.

What I thought about this card then: I pulled this card early in the collecting year, and it was a mini card. To me, Bosman looked very pissed off, and about 49 years old. He was actually 30 at the time of this photo and probably not pissed off at all.

What I think about this card now: For the longest time, I thought Bosman was the pitcher who got in a fight with his manager, Billy Martin, in a bar during the late 1960s. But it was actually Dave Boswell who got in the fight with Martin, who was then the Twins manager. Bosman never even played for the Twins!

After being traded to the Indians, he threw a no-hitter against Oakland in 1974 (Bosman lost a perfect game when he made a throwing error in the fourth inning). The A's would go on to win the World Series that year and then acquire Bosman the next year. I wonder how often that happens, a team gets no-hit by a pitcher and ends up acquiring him?

After his career, he became a pitching coach for the White Sox, Orioles and Rangers. He's worked with Tampa Bay for the last seven years. 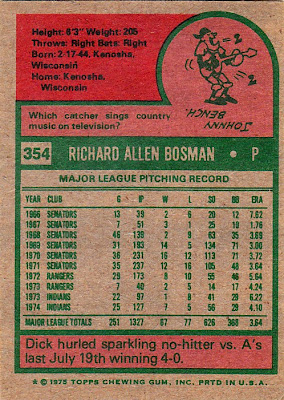 Back facts: I recall hearing that Johnny Bench sang, but I do not remember watching him sing on TV. Although he could have been on an episode of Hee-Haw and I totally blocked it out.

Other blog stuff: I wanted to show the back of my mini card, just so my youngest brother can get some credit on this blog: 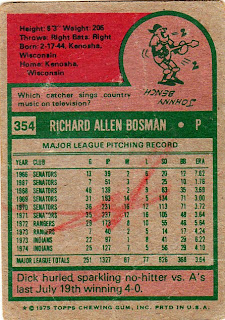 That scribble in orange crayon is his handiwork. He was about 4 at the time.
Posted by night owl at 2:31 AM

Little brothers can obviously be as annoying as little sisters. Time heals most of those wounds though. I remember Bosman well from his time as the Rangers pitching coach.

Great card and story... Bosman seems like a really happy go lucky kind of guy so that photo doesn't fit. Maybe he was just pissed that he was in Cleveland, who knows? Bosman will be part of the Rays coaching staff for Florida Instructional League again this year. Looking forward to seeing him. I love the fact that his shot at a perfect game was killed by his own error. That has to be hard to deal with... Cheers!

I am in no way affiliated with Dick Bosman.