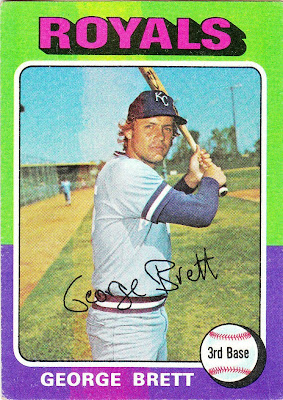 Card fact: This is George Brett's rookie card. What else do you need to know?

What I thought about this card then: I did not see it in 1975. However, this card is the first card I acquired solely because it was a player's rookie card. The "rookie card" was still a novel concept when I purchased this card (probably around 1980, 1981). But I had to know it was a desirable card to seek it out in a mail-order catalog and buy it. I can remember only one other card I ordered with the Brett card (you'll see it soon), and I remember being quite pleased when Mr. Brett arrived -- even though it has a faded stripe through the middle of it. I thought I had gotten a steal on the price.

What I think about this card now: I was very happy that I went through the trouble of getting the card when I was a teenager, because when I worked to complete the set six years ago, the price of the Brett card had ballooned to one of the highest in the set. The card I had ordered as a teen was still in decent shape, enough for me to not even consider buying a new Brett card.

Other stuff: It's interesting that the two most coveted rookie cards in this set (Yount and Brett) are five cards apart.

Otherwise, you all know George Brett. He was my non-Dodger hero during his career. His home run against Goose Gossage in the 1980 ALCS was, for me, the sign that the Yankee dynasty that I had endured for most of the previous four years was about to end. The Yankees were conquerable! Brett had just shown how it was done. The Dodgers followed suit in 1981.

I remember Brett's quest for .400 in 1980 very well. I can recall sitting in my grandmother's home during that summer, reading the newspaper accounts of Brett's latest games. I also remember those same newspapers detailing his hemorrhoids battle during the 1980 postseason. George Brett taught me the misery that is hemorrhoids. I never knew what they were before 1980. It was all quite horrifying.

One other thing. A guy I work with knows the Brett family. He says they're all nuts. I believe him. 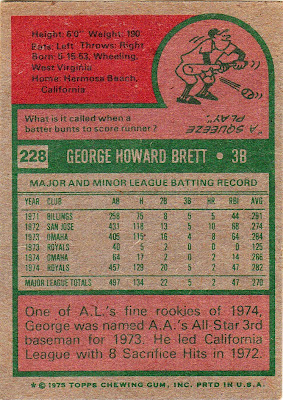 Back facts: Brett had a fairly decent rookie season, but he was beaten out by Bill Madlock at third base for mention on the Topps All-Rookie team. No gold cup for George.

Other blog stuff: With this card, the green-purple color combo (Incredible Hulk) ties the pink-yellow combo (marshmallow peeps) for the most cards so far with 21 each.
Posted by night owl at 2:58 AM

That is one of my favorite all time older cards. The 75 set is one I debate putting together again but I don't know if I could get it done. I had a few of those Bretts as a child but my mother threw out my collection when I moved out so I now need to find another one.

This card brings back painful memories for me. I actually got one of these from the Old Man I did a series of posts on. Brett's quest for .400 and the 1980 team made a fan of his so I asked the Old Man for one. He traded it to me and I ended up trading it to my friend for something I don't even recall. Sigh.

My Dad bought this card for me for (I think) $20 back in the early '80s. It was the first time in our collecting partnership that I realized, "Wow, Dad's into this stuff too now!" He had never spent that much money on a single baseball card. My Mom thought he was nuts. That Brett card is one of my favorites from the '75 set for that reason, and I smile whenever I see it.

Hey. I found your blog while searching Google for this same George Brett card. Very cool. Q: I have a few cards I'm going to sell including the GB #228, wondered if you'd recommend ebay or somewhere else as a good place to sell? FYI: I'm not a serious collector, just want to get a reasonable market price for what I think are a few good cards and work with good people. -K

Ah George and his well-documented butt issues. The video of him sharing horribly uncomfortable stories with some young player at spring training is one of the more bizarre things I've ever seen.

But there's no doubt he was a fiery competitor and one of the game's greats. What a privilege to watch him and Schmidt in their primes year in and year out.