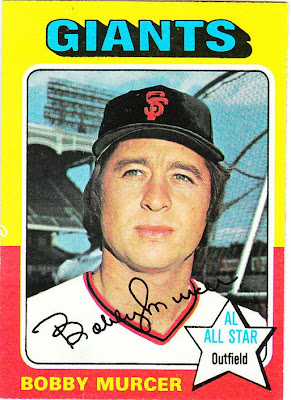 Card fact: If there was a book on "The History of Airbrushing," this card would be Exhibit A in the lengths that Topps would go to to depict a player in the correct uniform.

I already posted about this card once, so I won't go into much detail, but to sum it up, Topps is telling you that Bobby Murcer made the American League All-Star Game as a Giant. Ohhhhhh-Kaaaaaaay.

What I thought about this card then: Never saw it. If I did, I think I might have wondered how a Giants player ended up at Yankee Stadium.

What I think about this card now: I've basically already mentioned it. It's possibly the most untrustworthy airbrushing job ever.

Other stuff: Bobby Murcer, a.k.a. "the next Mickey Mantle" when he came up in the 1960s, was thought to be the guy who would pull the Yankees out of their doldrums of the late '60s/early '70s. But he wasn't. Murcer was a talented player, Gold Glove fielder, and one of the highest salaried players in the game, but unlike Mantle, he wasn't surrounded by All-Star performers.

Murcer was eventually traded to the Giants for Bobby Bonds in October of 1974. He struggled with his power in Candlestick Park and was shipped to the Cubs two years later. Murcer then returned to the Yankees for the early part of the 1980s as a part-timer player.

After his playing career, he became an announcer for the Yankees and worked in that capacity for two decades. In late 2006, he was diagnosed with a brain tumor. After a two-year battle, he died from brain cancer complications in 2008. 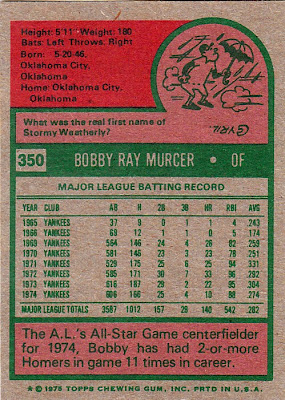 Back facts: Cyril Roy "Stormy" Weatherley was an outfielder for the Cleveland Indians in the late 1930s and early '40s. I doubt if anyone remembered him even in 1975.

Other blog stuff: Time to add another player to the 1974 All-Star lineup. I will place Murcer under the American League column, despite Topps' attempts to confuse me:

By the way, I realize I'm posting a Giants card immediately after the team clinched a spot in the World Series. Yes, it's coincidence, and no, I don't like it one bit.
Posted by night owl at 3:08 AM

Another fine example of random capitalization with Homers.

I'm sure they whited out the pinstripes, too. Oh, I'll take the WS berth! I just coincidentally posted Nolan Ryan after the Rangers beat the Yanks.