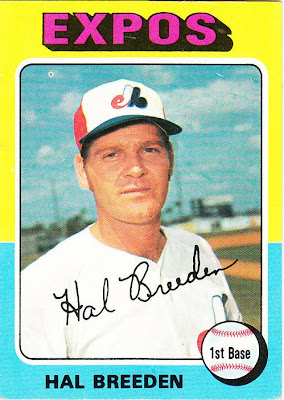 What I thought about this card then: I never saw it. In fact, this was another player that I never knew existed until I set out to complete the entire set five years ago. It's hard for me to believe that I went three decades without knowing about this guy. In fact, even after obtaining the card, I kept thinking Breeden was a pitcher. I don't know why.

What I think about this card now: He's a first baseman. Got it?

Other stuff: Breeden played for five seasons with the Cubs and the Expos. He never played in more than 105 games in any one season. He started with the Braves organization and was traded straight-up for Hoyt Wilhelm in a deal with the Cubs.

With the Cubs, Breeden played with his brother, Danny, who had a brief major league career. But Breeden's best success came in 1973 with the Expos. He hit 15 home runs in 290 at-bats. The Expos played him in half their games in 1974, but his power production was not what it was the prior year. He played one more year and then went to Japan to play for three years. 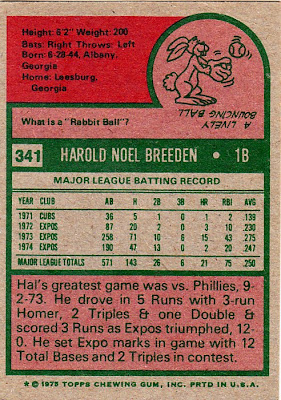 Back facts: If you look at Breeden's vitals, you'll note that he threw left-handed, but batted right-handed. That is very rare. I noticed this before checking his wiki page, and wiki notes it in the second sentence of the write-up. You see a lot of right-handers batting lefty, but not the other way around.

Other blog stuff: On this date in 1975, Luis Tiant won his second game of the World Series to help the Red Sox tie the Reds at two games apiece. Tiant threw 163 pitches. 163!!! Looouie says you can take your lefty-righty matchups and STICK IT!
Posted by night owl at 12:51 AM

I am not familiar with the term "rabbit ball". Mr. Breeden had one helluva game opn 9-2-73.

A lot of people miss hitting for the cycle by failing to get a triple. Hal got TWO triples (or Triples, as the write-up would say) but failed to get a single.

Maybe you thought he was a pitcher because you were confusing him with Harry "the Cat" Brecheen, the former Cardinals and Browns pitcher and Orioles pitching coach.

Even though the Bros. Breeden weren't stars, it had to be cool to play on the same team even if just for a short time. I love that stuff.