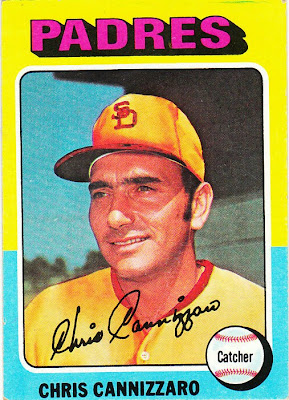 Card fact: This is the final card of Chris Cannizzaro issued during his playing career. In fact, he didn't play in the majors at all in 1975. His last major league game was Sept. 28, 1974.

What I thought about this card then: I did not see it, yet somehow I have the mini card. Almost all of my mini cards were acquired in 1975. But I must have obtained this one somewhere else.

What I think about this card now: That is an atrocious airbrushing job. Did San Diego ever wear caps that looked like that? They certainly didn't in 1974. My guess is he was wearing a Dodger uniform in this photo, as he played for Los Angeles in 1972 and 1973. His 1972 Topps card was one of the first Dodgers I obtained from that set.

Other stuff: Cannizzaro was the definition of a journeyman player. He caught for six different teams during a major league career that stretched from 1960 to 1974. His first Topps card is in the 1961 set, yet there are four years in the '60s in which he didn't have a card.

Cannizzaro played during the first season of the New York Mets in 1962 and is possibly most known for Casey Stengel mispronouncing his name as "Canzaroni." Cannizzaro also was an original San Diego Padre. It was there where he received the most playing time, since San Diego was in dire need of talent. He was also the Padres' first All-Star, playing in the game in 1969.

After his career, Cannizzaro became a coach with the Braves and Angels. He now works as the University of San Diego's director of baseball operations. 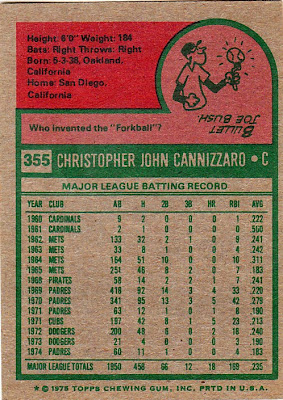 Other blog stuff: I've got to get up early in the morning. No other stuff today.
Posted by night owl at 12:31 AM

that is certainly a magnificent hat.

Let's give the man some credit. He did hit .500 for the Cardinals in '61. Umm..and the hat is great and awful at the same time.

The hat and uniform don't mix. The uniform is 72 while the hat approximated the one year only 1971cap.

I think the most amazing thing about him is making the all star team in 69 given his lest medicore at best stats. Looking at that year's game log he was slightly better in 1st half at best but it didn't an all star selection. I guess the NL really need an extra catcher. A better choice would have been Ollie Brown or Roberto Pena.

Steve Swisher made it for the Cubs in 74 or 75 when Madlock was clearly the one to pick!

Chris was on the Padres in '74, and yet, Topps chose that airbrushing job over taking a pic