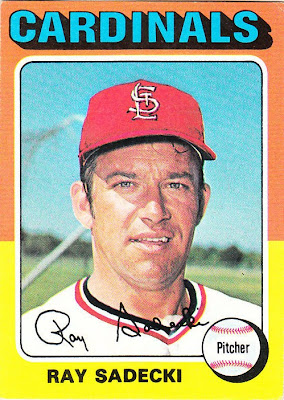 Card fact: Ray Sadecki is airbrushed into a Cardinals cap and uniform as he was traded from the Mets on Oct. 13, 1974, which was too late for Topps to get a photo of Sadecki as a Cardinal (unless they wanted to go back to when he pitched for the Cardinals between 1960-66).

What I thought about this card then: Didn't see it. Sadecki is another one of those guys who retired right as I was getting into baseball, so it was decades before I knew who he was. He did have one final card in the 1977 Topps set, as a Brewer, but since he didn't pop up in another set after that, he meant nothing to me.

What I think about this card now: One of the poorer photos in the entire set. Just lousy.

Other stuff: Sadecki was traded for some heavyweights in his career. In 1966, he went to the Giants in exchange for Orlando Cepeda, who ended up helping the Cardinals to a World Series and winning MVP honors. In 1974, Sadecki was sent from the Mets back to the Cardinals for Joe Torre, who ended managing the Mets.

Sadecki started out with St. Louis, and was a 20-game winner for the 1964 pennant-winning Cardinals, who defeated the Yankees in the World Series. In 1968, while with the Giants, he had one of his better seasons, striking out a career high 206 and recording a 2.91 ERA. But he led the league in losses with 18.

After getting traded back to the Cardinals in 1974, he didn't stay there long. He was traded again in May of 1975, this time to the Braves. He bounced around to the Royals, Brewers and then back to the Mets before closing his career in 1977. 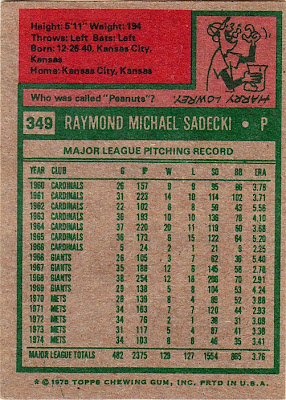 Back facts: Harry "Peanuts" Lowery, an outfielder with the Cubs and Cardinals mostly, got his nickname from his small stature as a kid, not because he liked peanuts.

Other blog stuff: Since everyone is enjoying the Yankees' defeat so much, I'll mention a Yankee loss that I enjoyed a lot. On this date in 1981, the Dodgers beat the Yankees 5-4 in Game 3 of the 1981 World Series. This is one of the more memorable games that I have ever watched. My favorite player, Ron Cey, hit a 3-run home run against Dave Righetti in the bottom of the first. Dodgers starter Fernando Valenzuela worked in and out of trouble. Cey then scored the eventual winning run on a double play grounder. Then in the eighth, Cey halted a Yankee rally, by diving to catch Bobby Murcer's foul bunt and doubling the runner off of first.

The Dodgers were down 0-2 in the Series at the start of the game, but would go on to win the rest of the Series. My favorite player was the catalyst. I'll never forget it.
Posted by night owl at 3:48 AM

I was able to have a phone interview with Sadecki a few years back, and there were two things he said that were interesting about his career.

First, he was an awfully good hitter for a pitcher. He rarely struck out.

Second, he played with an awful lot of Hall of Fame players. Musial, Mays, Seaver, Ryan, even Killbrew, Brett and Yount toward the end. He also played for Yogi and Red Schoendienst. He may have played with more Hall of Famers than any other player, but I haven't run those numbers.

That is a pretty bad picture. Could be some guy at the company picnic.

I've sure enjoyed all the Yankee defeat talk over the weekend.

If the Sadecki/Cepeda trade never went down, Cepeda would have still won the MVP and the Giants would have beat the Red Sox in the world series. Either way, Sadecki would have been the loser.

Other HOF'ers he played with were McCovey, Marichal, Gaylord Perry, Bob Gibson.