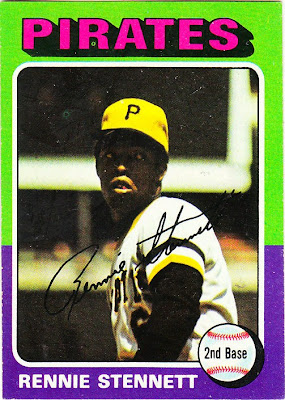 Card fact: In my opinion, this could be the worst photograph in the entire set. There is too much space above Rennie Stennett's head. His face is entirely in the shadows. His arm is cut off so you have to guess as to what he's doing there and, well, let's just say the whole thing is awful.

What I thought about this card then: Thank goodness, I never saw it.

What I think about this card now: See above.

Other stuff: Rennie Stennett was both a starting outfielder and infielder for the Pirates throughout the 1970s. I was first introduced to Stennett by his 1976 Topps Record Breaker card, which documented his most famous achievement, going 7-for-7 in a 9-inning, 22-0 thrashing of the Cubs in 1975.

Stennett was known as a good fielder and hitter. In 1977, he led the league in batting at .336, but broke his leg in August and was finished for the season, failing to get enough at-bats to win the batting title. After that, his hitting tailed off. By 1979, the year of the "We Are Family" Pirates, Stennett played in just 108 games and managed just a couple of appearances in the postseason, as Phil Garner had taken over Stennett's second base position by then.

Stennett left as a free agent after the season to join the Giants. His career ended after the 1981 season. 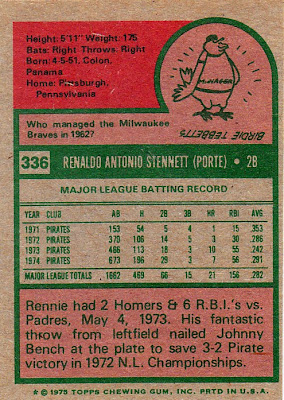 Back facts: The play during the 1972 NLCS that Topps is mentioning in the write-up came in Game 3 of that series. It actually happened in the fourth inning of that game with the Reds winning 2-0 at the time, so I think "saving" the victory is a stretch. Bench had led off the inning with a triple, then was thrown out on Cesar Geronimo's fly ball to left field.

Other blog stuff: Phillies infielder Placido Polanco was born on this date in 1975.
Posted by night owl at 2:58 AM

Wow, the border colors, mixed with that bright yellow Pirates hat, really pop out at you.

I remember when Stennett signed with the Giants. The press always made a big deal out of free agent signings back then since it was such a new thing. Every free agent signing was supposed to "save the ballclub."

First, I agree that the picture is horrible.

Second, I love the cartoon...sorta reminds me of Foghorn Leghorn.

Third, I wonder how many people have had two hits in an inning twice in the same game. Not enough to research it, but I wonder.

If I remember correctly, the Giants have only two years left on Rennie's contract to pay off, then they can use the money to go get some big bats.

Iactualy rally like this card. I hate the plain boring poses. This is at least interesting, and let's face it, Rennie is no oil painting.

I never had this card but I do recall being so impressed with the 7-for-7 feat that I loved (and vastly overvalued) my 77T Stennett.

I seem to recall a cartoon in a future set commemorating the feat that showed a batter with 7 balls flying off the bat. Can anyone place that one?