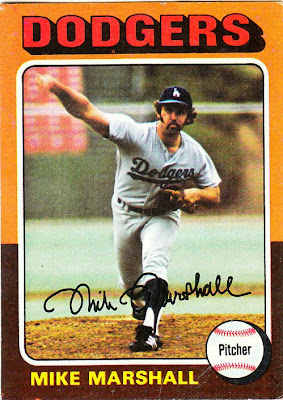 Card fact: This is the official halfway point of the 1975 Topps set. I have reviewed 330 cards and there are 330 more to go. You didn't think I'd get this far did you?

What I thought about this card then: I did not see it. Mike Marshall's 1976 Topps card was the first one of his that I knew. It was also an action shot and it was a favorite. I read a long time ago that at some point in Marshall's career, he refused to pose for photos for Topps, so Topps was forced to take photos of him during games. That worked out pretty well for the collectors, who got some cool photos of Marshall. But later Marshall disappeared from card sets altogether, so I think he put the kiebash on having his photo in card sets completely.

What I think about this card now: Marshall has that look about him that is standard for relievers today, but wasn't too common then. I think Marshall, Rollie Fingers and Sparky Lyle blazed the trail for the wild-looking closers to come.

Other stuff: Mike Marshall is known for his record-shattering relief performances during the 1974 season, as well as for his passionate opinions on pitching methods. In 1974, Marshall appeared in 106 games and 208 1/3 innings pitched. All of them came in relief. He also appeared in 13 straight games for the Dodgers. That record, along with the 106 games pitched, remain major league records. Marshall won the National League Cy Young Award in '74 and finished third in the MVP voting. He was an All-Star in both '74 and '75.

Marshall also played for the Tigers, Pilots, Astros, Expos, Braves, Rangers, Twins and Mets. His emergence in relief pitching actually started with the Expos during the 1972 season, when he finished fourth in the Cy Young voting. The following year he pitched in 92 games for the Expos, which helped Montreal land Willie Davis in a trade with the Dodgers for Marshall.

Marshall was later traded to the Braves for Lee Lacy and Elias Sosa in mid-1976. He never did pitch quite as often as with the Dodgers, although he enjoyed a resurgence with the Twins in the late '70s, appearing in 90 games in 1979.

Marshall has several degrees and a Ph.D. in kinesiology, a word that confused the heck out of me as a kid. He has taught college courses on pitching and human movement and believes his methods would irradicate pitching injuries. But his beliefs have been at odds with conventional pitching methods. 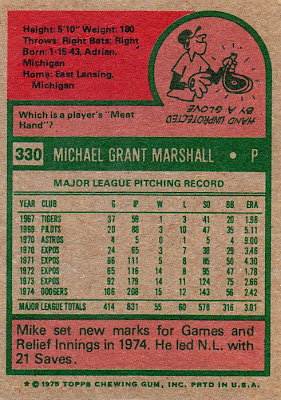 Back facts: Take a look at those fascinating numbers in 1973 and 1974. He appeared in 106 games in relief and had just 21 saves. He could have set a save mark that would have lasted forever!

Other blog stuff: The orange-brown combo is creeping back toward the top again. After all those pink-and-yellow league leaders cards, orange-brown is now just one card away from pink-yellow.
Posted by night owl at 1:53 AM

I always loved this card.

And you forgot the prototype of the crazed reliever, the Mad Hungarian, Al Hrabosky.

What? No comment about the "meat hand" cartoon. I'm sure that elicited a chuckle or two from kids at the time.

That is a great action shot too. I didn't want you to think I was focusing too much on the meat hand.

That's three straight cards with level backgrounds in the photos...that has to be some sort record.

Marshall is also well known for his refusal to sign autographs. One autograph expert I know (he told me this in 83) said he is the toughest in the sport. Oddly enough he is now his rep for very private signings.

A while ago HBO Inside Sports did a piece about his the pitching school he runs.

I had never known of Marshall's dispute with Topps before. From a little internet research:

--Marshall's '73 card has a posed shot, but it looks like it might be airbrushed...even though he had been with his current team (the Expos) since 1970.

--Marshall didn't get a card in '78. This may not have been related to his issues with Topps, though. Marshall missed most of the 1977 season due to injury (he did not appear in any games after June), then became a free agent after the season. During the 1977-78 offseason there seems to have been some question as to whether he would play in 1978. He didn't sign with anyone until the Twins picked him up about a month into the season.

--Marshall didn't get a card in either the '79 or '80 sets, with no apparent explanation.

--Marshall's last year in the majors was '81. He didn't have a card that year, but he was more or less out of baseball at the time Topps would have been assembling its set. Minnesota had released him with the 1980 season in progress, and the Mets didn't sign him until August 1981. The Mets released him shortly after the end of the season.